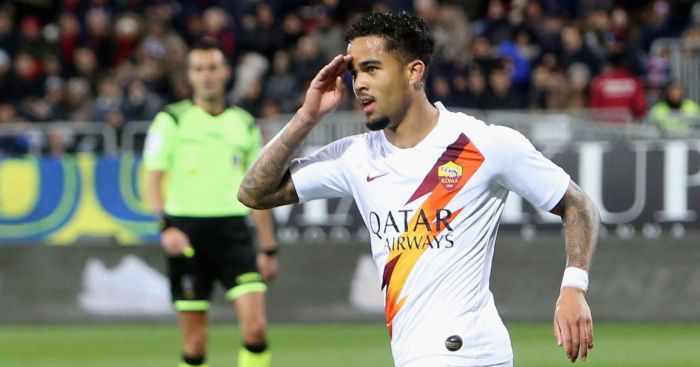 While Arsenal zero in on a former Man Utd target, Chelsea are eyeing a left-back not long ago wanted by the Gunners…

MKHITARYAN THE MAKEWEIGHT IN ARSENAL/ROMA SWAP?
Henrikh Mkhitaryan could prove to be of some use to Arsenal after all…by shuffling off to Roma permanently as a makeweight in a deal to sign Justin Kluivert.

Mkhitaryan has spent the season playing alongside Kluivert in the Roma side and Arsenal have no real desire to take the Armenian back. According to Calciomercato, they would far rather Roma send them Kluivert instead.

So too would Mino Raiola since a swap deal would mean double commission for the agent of both players. But Roma aren’t daft. They won’t accept a straight swap, which is said to be Arsenal’s preference, and they want Mkhitaryan to come back next season with a truckload of Arsenal’s cash too.

Kluivert joined Roma two years ago almost to the day for around £15million. Despite the Dutch forward having only scored seven goals this term, they are still said to be looking for around £20million in addition to Mkhitaryan.

CHELSEA TURN TO FREE AGENT
While Arsenal go after a former Manchester United target, Chelsea could turn their attention to a player not long ago chased by the Gunners.

Frank Lampard would love to bring Ben Chilwell to Stamford Bridge this summer, but if he didn’t anticipate the problems Chelsea might have in getting Leicester to part with the England full-back, it seems he’s firmly in the picture now. And the Daily Express reckons the Blues have been so discouraged by Leicester’s stubbornness that they are turning their focus elsewhere.

Apparently, Layvin Kurzawa is Chelsea’s preferred Plan B, with the sweetener being that Kurzawa might cost nothing but a fat wage packet.

The PSG left-back is days away from becoming a free agent and Arsenal have been sniffing since last winter along with Barcelona and Atletico Madrid. Reports in France suggest PSG have also put a contract offer on the table in recent days, though Kurzawa is said to be demanding double his current salary to sign.

ONA-NAH
Andre Onana had big plans for this summer. Okay, so we all did, but his probably didn’t involve a fortnight flitting between the pool and the buffet. Rather, the Ajax keeper had his eyes on a big move, perhaps to the Premier League. But like the rest of us, he will just have to wait.

The Daily Mail reckons Onana will serve another year in the Ajax net before trying again in a year when things hopefully aren’t quite so ridiculous. That gives Premier League clubs like Chelsea, as well as Barcelona, the time to get their goalkeeping ducks in a row before making a bid for the Cameroon stopper.

Because Ajax won’t let the 24-year-old go cheap. And their fans aren’t too proud to beg. Onana arrived at training on Monday to be a greeted by a banner pleading: ‘Please one more year’.

Ajax won’t be in a position to be quite so demanding in 12 months; Onana has only one more year remaining on his contract.

AND THE REST
Juventus have offered Daniele Rugani and Federico Bernardeschi to Wolves in exchange for Raul Jimenez… Juve have confirmed negotiations with Barcelona are ongoing over a sap deal involving Miralem Pjanic and Arthur… Thomas Meunier will join Borussia Dortmund from PSG on a free… Edinson Cavani will also refuse a short-term PSG deal to play in the Champions League… Rennes are confident of keeping Real Madrid target Eduardo Camavinga for another year.