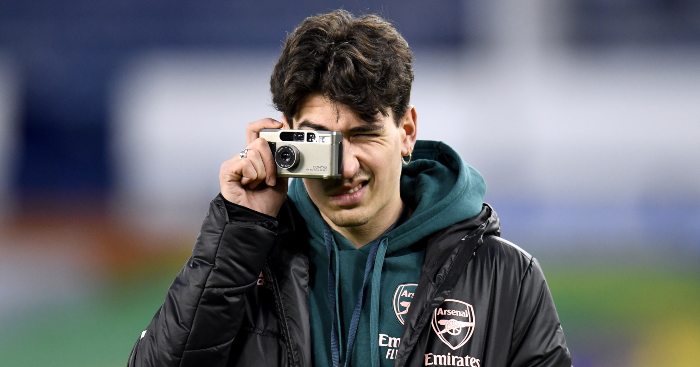 ARSENAL EYE LAMPTEY
Arsenal want Brighton defender Tariq Lamptey to replace Hector Bellerin if the right-back leaves for Barcelona in the summer, according to reports.

Spanish full-back Bellerin has come under heavy criticism this season from supporters and pundits after the Gunners made a terrible start to the Premier League season. And the Daily Mirror reckons that Barcelona are ‘lining up a move for’ Bellerin with presidential candidate Joan Laporta – who is favourite to win the vote – keen on signing the Arsenal defender.

The report adds that Mikel Arteta managed to ‘persuaded Bellerin to stay’ in the last transfer window after there was interest from Ligue 1 giants Paris Saint-Germain. However, if Bellerin does leave the club in the summer then the Gunners have a back-up plan, which comes in the form of Brighton right-back Lamptey. Arsenal are ‘keeping close tabs’ on the 20-year-old, who swapped Chelsea for Brighton in the summer.

Bayern Munich and Manchester City ‘have also been watching his progress along with Arsenal’ and Lamptey has been impressive this season for the Seagulls and been talked about as a future England international. The report finished by claiming that ‘if they do end up losing him [Bellerin] then Lamptey could be their first choice replacement’.

WIJNALDUM NEEDS MORE TIME
Georginio Wijnaldum wants more time to decide his future at Liverpool with a new contract offer on the table, according to reports.

Wijnaldum is in the final year of his contract at Anfield and had been consistently linked with a move to other European clubs and is free to negotiate with suitors in January. Jurgen Klopp has maintained that the Dutchman is a vital part of the club’s future but The Guardian claim that the Netherlands international ‘has asked Liverpool for more time before deciding whether to accept a new contract offer from the club’.

The report adds that Liverpool offered a new contract to Wijnaldum at the beginning of this month but they ‘have so far not been able to convince him to sign the new deal’. Wijnaldum can speak to clubs abroad from January 1 but the 30-year-old ‘would like a few more days to decide on this future’. The Guardian continue by saying that Wijnaldum ‘has promised Liverpool that he will let the club know of his decision before he starts talking to any clubs, should he decide that his future lies elsewhere.’

AND THE REST…
Arsenal have offered Mesut Ozil to Juventus on a six-month loan and would subsidise his wages to help make the deal happen…Ex-Tottenham boss Mauricio Pochettino has signed a deal to take over at Paris Saint-Germain after the French club agreed to pay £5.4m compensation to former boss Thomas Tuchel…Wolves have enquired about signing Luka Jovic on loan from Real Madrid….Phil Foden is growing increasingly frustrated at his lack of regular game time at Manchester City…Tottenham are considering a deal to re-sign midfielder Christian Eriksen.