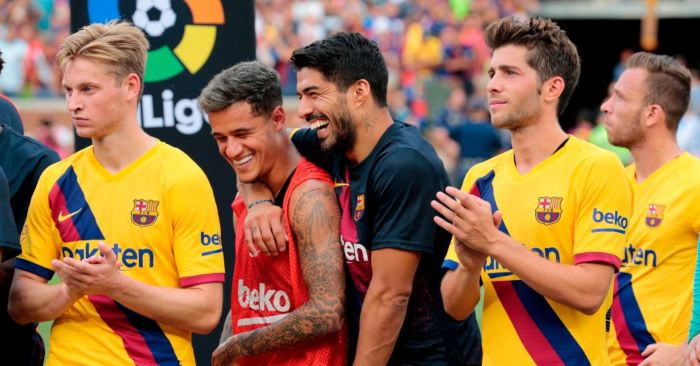 COUT AND DRY
Arsenal will hope to channel the combined forces of Per Mertesacker, Aaron Ramsey and Alexis Sanchez in Saturday’s FA Cup final against Chelsea. Victory would deliver Mikel Arteta his first trophy as a manager and secure Europa League qualification, thus ‘significantly’ increasing their summer transfer budget.

And it just so happens that they could sign the world’s fifth most expensive player ever for ‘a notional £9m’. The prospect of signing Philippe Coutinho and letting Matteo Guendouzi leave for Barcelona is one of ‘multiple options’ Arsenal are ‘weighing up’.

Coutinho ‘would prove attractive’ as a signing for a couple of reasons, according to The Independent. His best position is one Arteta needs to strengthen in, and his arrival as a central creative force ‘would also offer insurance’ in the event Pierre-Emerick Aubameyang leaves. That sounds a little tenuous.

Juventus also want Guendouzi and there is the possibility of a swap deal with The Old Lady. But for all intents and purposes, a move to Barcelona, involving Coutinho heading to north London, sounds more plausible.

WAT NEXT
Arsenal are also mentioned ever so briefly as being ‘admirers’ of Abdoulaye Doucoure. Everton will ‘return’ with a move for the Watford midfielder they bid around £30m for last summer.

The Daily Mirror suggest he will be one of an unsurprising number of players targeted by clubs after Watford’s relegation. Wolves would be after Ismaila Sarr if Adama Traore goes; Gerard Deulofeu might head back to AC Milan; Troy Deeney has openly acknowledged uncertainty over his future.

Watford did contribute a few wonderful players to this strikingly good XI. At least a couple will surely depart Vicarage Road.

PIECE OF DEPAY
Jadon Sancho did not join Manchester United on Friday, then? Shocker.

In fact, the Premier League club ‘want to play for time’ over the winger. SportBild suggest United wish ‘to explore whether the pain threshold in Dortmund is really 120 million euros’.

Just in case, the German club have identified ‘a potential successor’. Memphis Depay ‘is brought into conversation’ at the Westfalenstadion and with his contract expiring next summer, the 26-year-old would be a solid enough replacement if Sancho is sold.

An intriguing thread to this story is that United would have to be informed if Lyon accepted a bid for Depay, due to the buy-back clause inserted in the deal that saw him leave Old Trafford in January 2017.

What a neat way of bringing us back around: Arsenal were linked with Depay last month in case Aubameyang left.