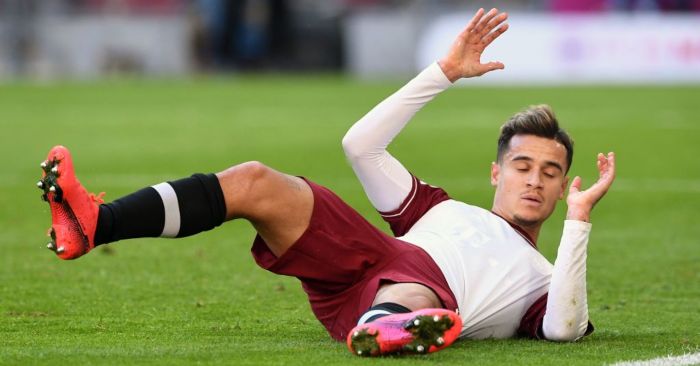 A COUT ANGLE
In a classic of the genre, it is a French website that has the exclusive on an English club wanting to sign a Brazilian player who is currently on loan in Germany from a team in Spain. Fun. Arsenal are interested in Philippe Coutinho.

In fact no: Mikel Arteta ‘dreams’ of it. He wants to ‘make him his master at playing’. He is desperate to sign a player who spent about five years ‘enchanting’ Liverpool.

This comes from Le10Sport, who add that such a ‘very expensive’ deal would prove to be ‘a complex case’ for Arsenal. But the heart wants what the heart wants and they ‘have even made their arrangements’ to open discussions with Gary Neville’s best mate Kia Joorabchian.

Either way, ‘the Premier League remains a very likely destination’. Arsenal join Newcastle, Chelsea, Tottenham and Leicester in being linked with Coutinho, who Barcelona are thought to want at least £62.5m for.

F365 Says: At last, a Coutinho rumour that makes sense

FEE-FI-FO-FANA
Our new favourite thing ever might be this headline from the Daily Express:

That will be Wesley Fofana, the ‘next’ version of a player he is three months older than.

Anyway, the fact that Saint-Etienne manager Claude Puel ‘is hoping to strike another deal that will see Fofana sold but then loaned back’ is the claim here. Arsenal, Everton, Leicester, Leipzig and Milan are interested in a player rated at around £5m, although an auction is likely to bump that up.

AINSLEY’S CHARIOT
How will Arsenal be funding these moves? By selling Pierre-Emerick Aubameyang to PSG and offloading Ainsley Maitland-Niles to Milan.

After claims from numerous outlets that the 22-year-old ‘is not considered to be part of Mikel Arteta’s plans’ in north London, Football Italia report that Milan see him as an ‘alternative’ to their own Davide Calabria. No fee is mentioned. Seems legit.