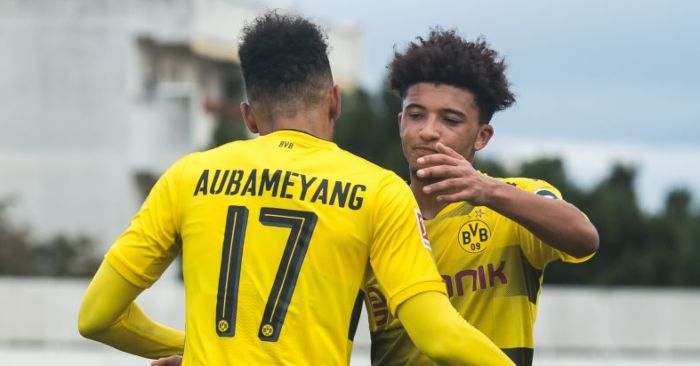 Arsenal have ‘growing confidence’ over Pierre-Emerick Aubameyang, with John Stones wanted. There is also a Jadon Sancho update.

PIERRE PRESSURE
Things are not quite as bad as they might seem at Arsenal. There were more than enough reasons to justify extending the contracts of David Luiz, Pablo Mari, Dani Ceballos and Cedric Soares, but any disappointment certain fans may feel – and any ridicule rival supporters will attempt – has been offset by two other bits of business.

This week has seen both Bukayo Saka and Gabriel Martinelli commit their futures to the Gunners for four years each, and Pierre-Emerick Aubameyang might be about to complete a wonderful hat-trick.

He ‘has expressed a willingness to stay’ and is ‘working constructively’ with Arsenal to find a solution that suits everyone. ESPN claim ‘there is growing confidence’ that a breakthrough can be found.

Aubameyang has made a few requests, which in itself suggests a willingness to at least consider spending the final elite years of his career in north London. The striker wants a three-year deal on £250,000 a week.

His current £200,000 earnings are topped up by a number of performance-related incentives, but Arsenal can console themselves that a relatively small increase of £50,000 would still make his weekly wage £100,000 less than Mesut Ozil’s.

As it is, £39m over three years is nothing for a guaranteed goalscorer.

INFINITY STONES
Mikel Arteta’s next wish is to improve that defence. Manchester City have been set that exact same challenge, which makes north London interest in John Stones all the more bizarre.

The 26-year-old has not featured since playing in the FA Cup fifth round a handful of days after messing up against Aston Villa in the Carabao Cup final. Stones has not been seen in the Premier League since mid-March, an injury keeping him sidelined before watching the demolition of Liverpool from the bench.

He is apparently fifth in the central-defensive pecking order under Pep Guardiola and The Sun add that the player ‘will consider his options this summer’.

Stones would be ‘open’ to returning to Everton, who themselves ‘would be interested in a cut-price deal’. There could also be ‘an escape route’ leading to Arsenal. No price is mentioned but it probably won’t take £47.5m.

NOTHING PERSONAL
Back in April, it was reported that Jadon Sancho had agreed personal terms over a move to Manchester United, with only a fee left to be negotiated with Borussia Dortmund. Fast forward three months, and we are essentially in the same exclusive position.

Ian McGarry of the Transfer Window Podcast states that a deal has been agreed ‘in principle’ between United and Sancho, which would see the player earn £140,000 contract initially, eventually rising to £200,000 over five years.

It might be true. It might not. The chances are it won’t even matter if United genuinely refuse to go above £50m. And it is worth remembering just how silly this source has been made to look recently.