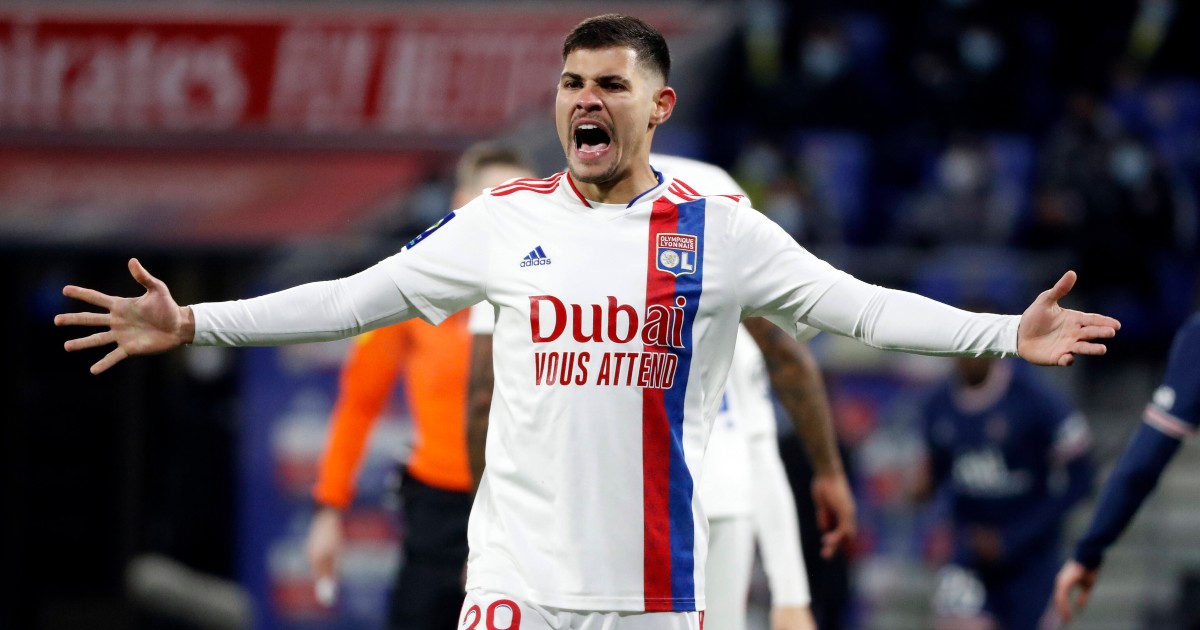 Arsenal have waited too long in their pursuit of Bruno Guimaraes as Newcastle have made a £33.5m bid. The Gunners may land on a Spurs target.

WE DON’T TALK ABOUT BRUNO
In news that was received predictably well by Arsenal Twitter on Tuesday evening, it emerged that long-term midfield target Bruno Guimaraes had been the subject of a bid from Newcastle. Having been named in prior reports as a player the Gunners were keeping a keen eye on, it was thought the Brazil international would wait until the summer to assess his options. He still might, but the Magpies have put the cat amongst the pigeons.

The Daily Mail say there is ‘hope’ within the St James’ Park club that Guimaraes will sign this month with ‘a substantial rise’ to his current Lyon earnings a decisive factor. Newcastle ‘have sensed an opportunity’ presented by Lyon’s financial difficulties.

That report adds that Nat Phillips, Dan Burn and Matt Targett are defensive targets for Newcastle after the complications encountered in negotiations over Diego Carlos.

The Guardian reiterate their interest in Robin Gosens, Jesse Lingard and Dele Alli, while putting the Guimaraes offer at around £33.5m. The Times throw James Tarkowski and Boubacar Kamara into an increasingly messy and desperate mix. Then there is the Daily Telegraph, who claim Newcastle ‘are hopeful of adding as many as five players’ in what is left of the transfer window; the only different one they mention is Aaron Ramsey.

With regards to Guimaraes, the choice is his. The Daily Telegraph are among those outlets pretending ‘Newcastle’s approach could prompt Arsenal into decisive action’ so he could delay the decision long enough to spark a bidding war.

GINI IN A BOTTLE
The suggestion that Arsenal could sign Georginio Wijnaldum seems to be powered by two things: the excitement of Ian Wright and the eagerness of the Dutch midfielder to return to the Premier League. As far as the Gunners go, they have done little to nail their colours to any mast.

Kaveh Solhekol of Sky Sports duly obliges in trying to secure Wijnaldum the return to England he so desperately craves, saying “he would like to play for Arsenal” and that possibility “is definitely something that appeals to him”.

It is added that any prospective move is contingent on PSG signing Tanguy Ndombele on loan from Tottenham, who themselves have been linked with Wijnaldum, who could then “become an option for Arsenal” because “we know Arsenal are looking for a midfielder”.

The bloke is adding two and two and might well be coming up with 427. Takekiro Tomiyasu’s agent must have been on the phone again.

LINGARDIUM WEVIOSA
But back to Newcastle because that really is fun. Their protracted move for Lingard is experiencing varying degrees of difficulty, depending on who you believe.

There is the Daily Mail, who say Manchester United are still ‘considering’ whether to let Lingard and fellow squad outcast Donny van de Beek leave temporarily this month. Chris Wheeler claimed ‘negotiations progressed’ after Newcastle committed to a loan fee, a survival bonus and the entirety of a ‘desperate’ and ‘frustrated’ Lingard’s wages.

That story, it should be said, has been scaled back somewhat by Wednesday morning; the clubs are now ‘thought to be some way apart’.

The Sun go further to say that the move is ‘on verge of collapse’ after the two clubs could not agree over… whether Newcastle would pay a loan fee and survival bonus. Some wires have been crossed along the way here.

To be fair, that is a line Sky Sports echo. They believe Newcastle ‘have all but given up hope’ on bringing Lingard in because Newcastle and Manchester United are too far apart in their valuations of the 28-year-old. One source says the move is ‘dead’. It does sound a bit like the former are trying to panic the latter into doing business  by waving the £33.5m Guimaraes stuff around to prove they have alternatives lined up.

There is also a line about Lingard going about, claiming he is ‘increasingly angered and exasperated’ with Manchester United for providing obstacles to the move. That came from the Daily Telegraph but the story was deleted soon after publishing. Again, someone has been

Van de Beek, by the way, has an offer on the table from Crystal Palace. And that is rather interesting.