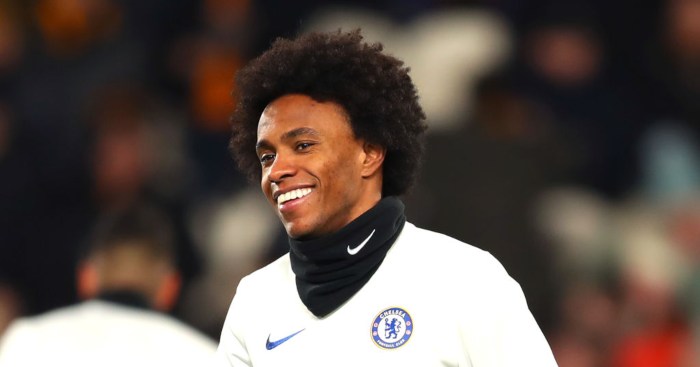 YOUNG, RICH AND FAMOUS
Wednesday evening was fun – and not just because Ole Gunnar Solskjaer finally b*llocked Jesse Lingard for being Jesse Lingard.

Rather, it was everyone finally realising the January transfer window was open that generated some overdue interest. That and Barcelona offering £85m for Richarlison. And Everton rejecting it.

Sky Sports were first with the claim, adding that the offer was lodged ‘earlier this week’ and ‘immediately’ turned down by the Toffees, who see Richarlison as crucial to their future.

The Daily Mail’s Dominic King would later brand the speculation as ‘nonsense’, with Sky’s former Spanish football expert Guillem Balague adding that it was ‘not true, anyway’. Both clubs sought to deny the rumour.

Still, those were a damn fun few minutes.

PRINCE WILLIAN
It didn’t quite end there. Soon after, Sky were back suggesting that Barca had made a £20m bid for Willian because it’s transfer tradition.

They were not alone this time. The Daily Mirror and Daily Mail had their own lines on the ‘audacious’ offer from a club desperate to replace the injured Luis Suarez.

This Brazilian at least has a contract that expires in the summer and a few players at his current club who would benefit from reduced competition and more opportunities. But Barca’s apparent response suggests it ain’t happening.

DOC MERTENS
Selling a forward is hardly what Frank Lampard had in mind when he said he wanted to revamp Chelsea’s attack. So news of their interest in Dries Mertens will be something of a relief.

The Daily Mail say the Blues have ‘made an enquiry’ for a player who ‘was expected to leave’ Napoli in the summer.

A looming PSG is one of a few substantial stumbling blocks. Napoli are reluctant to lose Mertens so late in the window, would demand at least £7m to let him go, and the player himself is content to stay and join Inter Milan for nothing at the end of the season.

As it stands, Chelsea made more signings during their one-window transfer ban in the summer than they have in the winter, having fought that suspension so vociferously. Just offer nine figures for Richarlison, guys.

AND THE REST
Tottenham are negotiating a deal for Real Sociedad’s 28-year-old Brazil striker Willian Jose, who has a 70m euro (£59m) release clause in his contract… Hertha Berlin are close to reaching a deal with AC Milan for Poland forward Krzysztof Piatek, 24, who is a target of Tottenham… Hertha will land Piatek for £23.5m after Spurs would only offer a loan move… West Ham have made an approach for Hertha Berlin’s Ivory Coast midfielder Salomon Kalou, 34.