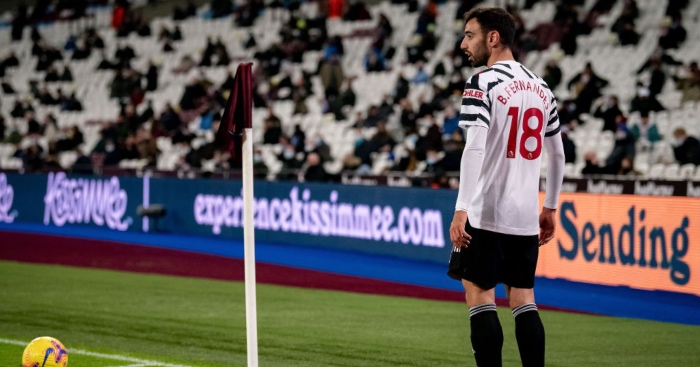 Bruno Fernandes set to double his money, while Man Utd, Liverpool and Chelsea battle for a centre-back…

The Portuguese star has been United’s most important player having arrived from Sporting Lisbon in January, scoring 22 goals and providing 14 assists.

Virtuoso displays – like his performance off the bench to overcome West Ham – have put Spanish giants Real Madrid and Barcelona on alert, and Ole Gunnar Solskjaer is understandably keen to ward off potential suitors.

The playmaker is just 11 months into a four-and-a-half-year deal, but United want to keep their top performer happy as Solskjaer looks to build his team around him and are set to double his money with a new and improved deal, according to the Mirror.

Fernandes was named the fans’ player of the year last season despite arriving halfway through the campaign and is already considered a key leader in the United ranks.

The 20-year-old has been ever-present for the Serie A side this season, and committed his future to the club this week by signing a new contract.

The new deal puts him under contract until 2024, but it is said to be a move to hike up his price ahead of an imminent transfer, rather than in a bid to tie him down long-term, reports the Mirror.

Cagliari described Walukiewicz as ‘magestic in the air’ when they completed his signing in January 2019, but the defender is also ‘very confident with the ball at his feet’.

All three Premier League clubs are said to be looking for ‘long-term options’ at centre-back with Chelsea currently relying on 36-year-old Thiago Silva, Liverpool continuing to struggle through injury and United on the hunt for a partner for Harry Maguire.