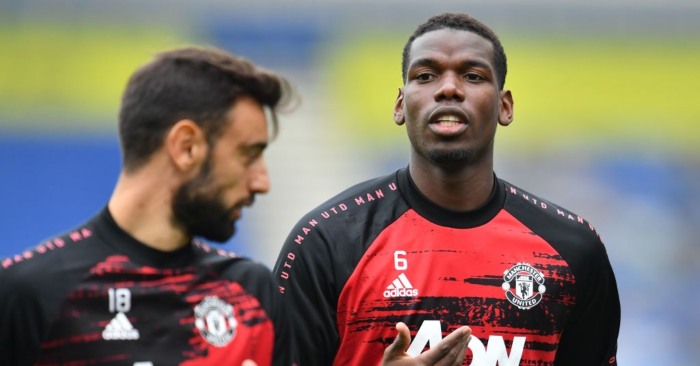 Bruno Fernandes is a target for Real Madrid and Barcelona, it says here…

A bucketload of salt at the ready here as this is a Neil Custis exclusive in The Sun, but he claims that ‘Real Madrid and Barcelona are ready to lock horns in a battle to get Bruno Fernandes out of  Old Trafford’. Well, he is too good for this iteration of Manchester United. He claims that they are ‘closely monitoring Fernandes’ situation’ but then gives literally no more details of as possible transfer, which makes us a tad suspicious.

The rest of the article is dominated by recent talk of Bruno Fernandes’ dismay at being substituted at half-time during the 6-1 shellacking by Spurs. There was talk of a half-time ruckus between Fernandes and the under-pressure Harry Maguire, denied by the Portuguese while away on international duty. So the links with Barcelona and Real Madrid do feel a little contrived to fit that particular narrative.

Paul Pogba has a new contract extension at Manchester United, but that is really only to protect his value so that he cannot leave for nothing next summer; he is now contracted until 2022. But according to Fabrizio Romano, Juventus will still be interested next summer, just as they were this year before Covid blew a massive hole in their finances.

Forgive the dodgy translation but: ‘The club’s losses prevented a purchase of  over 100 million with a salary of 16/17 million a year, before the pandemic Juve was ready to try seriously for the summer of 2020. Now it’s really complex to even think about it, United refuses each exchange option and will resume the case in June.’