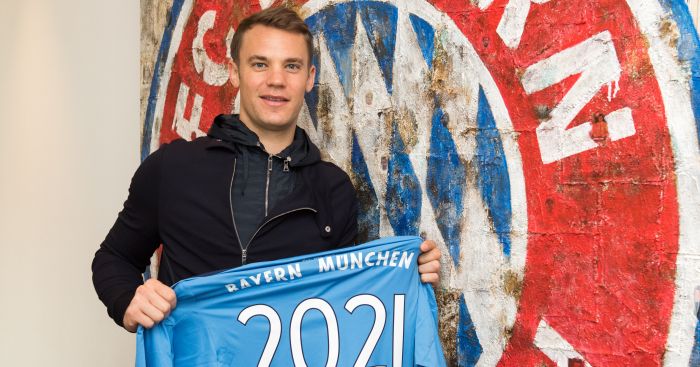 CHELSEA LINE UP NEUER SWOOP
We expected Chelsea to spend big this summer but the Blues hadn’t anticipated the need to invest again in a goalkeeper until Frank Lampard made his views clear on Kepa Arrizabalaga. Lampard wants to replace the Spaniard, though that is only half the battle. First Chelsea have to find a buyer daft enough to give them back a large slice of the £72million they spent on the world’s most expensive goalkeeper.

Should they find their patsy, then Chelsea are said to be keen on bringing Manuel Neuer to Stamford Bridge. The Bayern Munich keeper is a year from free agency and it seems a renewal agreement is some way off.

Bild reckons Chelsea are ready to take advantage should Neuer decide to try something new this summer, especially since Bayern have already signed Alexander Nubel from Schalke ahead of next season with succession in mind.

The prospect of signing one of the last decade’s greatest goalkeepers is a tempting one but Chelsea would do well to be wary. Neuer is 34 today – happy birthday, Manuel – and his fitness record in recent seasons has been sketchy.

TOTTENHAM TARGET INTER DEFENDER
Jose Mourinho isn’t the type to hold a grudge. Well, he is absolutely is, but apparently not in Diego Godin’s case…

Two years ago, Mourinho wanted Godin at Manchester United but the Uruguay defender strung the Red Devils along before signing an improved contract at Atletico Madrid.

Godin joined Inter Milan last year instead but The Mirror reckons Mourinho will make another play for the 34-year-old in his efforts to build a Tottenham XI of centre-backs. The report suggests United also hold no hard feelings and they will be in the hunt should the veteran leave Inter this summer.

The Tottenham midfielder has been the victim of Mourinho’s ire this season and, to be fair to the manager, Ndombele has deserved most of the flak after a wretched first season in the Premier League.

But that hasn’t put off Barcelona. Mundo Deportivo claims the Catalans still rate Ndombele and believe the Frenchman can add some dynamism to their midfield.

The biggest question here, aside from the judgement of the Barca scouts, is whether they can afford Ndombele. Daniel Levy forked out £52million less than a year ago for Spurs’ record signing and their seems little prospect of the chairman writing off a huge chunk of that investment.

AND THE REST
Real Madrid are intensifying their interest in Borussia Dortmund striker Erling Haaland who has a £50million release clause… Man Utd loanee Odion Ighalo has been offered a two-year contract extension worth more than £400,000 per week by Shanghai Shenhua… Everton have competition from three other clubs for Lille defender Gabriel… Chelsea, Real Madrid, Barca and Bayern all have eyes on Espanyol midfielder Nico Melamed… West Ham, Sporting Lisbon and Anderlecht are keen on Liverpool goalkeeper Loris Karius.