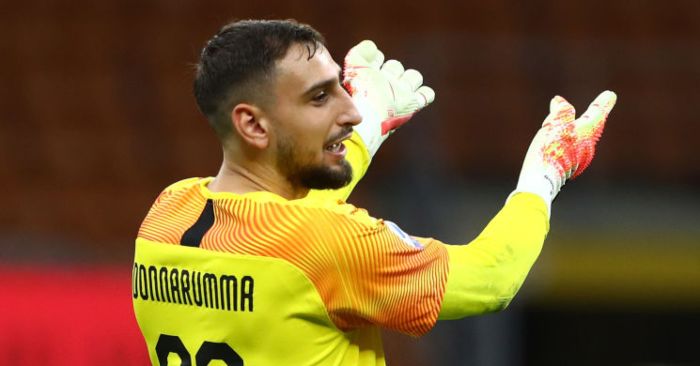 Chelsea may break the Premier League record for biggest single-window spend ever. Kai Havertz would take them past Real Madrid.

GIGI WHIZ
Their total spend on transfer fees, as of the morning of August 29, is £128.7m. That excludes any money involved in bringing Thiago Silva, Malang Sarr and Xavier Mbuyumba to south west London. Yet Chelsea show no signs of slowing down.

A goalkeeper could be next. Some names have been mentioned, from Edouard Mendy of Rennes to Mike Maignan (Lille), Andre Onana (Ajax) and Jan Oblak (Atletico Madrid). But a Football Insider exclusive throws Gianluigi Donnarumma into the mix.

Improving upon Kepa Arrizabalaga is regarded as a ‘priority’ at Stamford Bridge, and negotiations with AC Milan over their 21-year-old goalkeeper are underway. Chelsea recognise signing the £50m-rated Italian is a ‘long shot’ but they don’t seem to care all that much.

That sort of money could easily tempt the ‘vulnerable’ Milan into a deal, considering Donnarumma has less than a year left on his contract. Stranger things have happened.

Will Lampard survive latest rise of the Roman Empire?

RICE COOKING
So that would bring the overall tally to £178.7m. Actually, make that £258.7m, as Frank Lampard ‘still wants’ Declan Rice and is ‘prepared to play the long game’. The ‘nightmare’ continues.

The Blues are considering ‘finally making a firm offer’ to sign a player West Ham are desperate to keep. Chelsea see Rice as ‘ideal’ and ‘perfect’ to help in their quest to reestablish themselves as Premier League title contenders.

The ‘natural leader’ would bring versatility to Stamford Bridge, too. And while David Moyes is reticent to lose perhaps his only legitimately saleable asset, the lack of interest in Felipe Anderson and Manuel Lanzini could force his hand. Selling Rice might be the only way West Ham are able to fund their own squad improvements.

The Sun add that Chelsea are in ‘a strong position’ and thus will ‘try to push the fee well down’. £80m is the starting point.

Rice and Donnarumma would help Chelsea shatter the Premier League record for biggest spend in a single transfer window. Throw in Kai Havertz and no club in football history would have invested more in one go.

Remember when Roman Abramovich was about to pack it all in and call it a day?

TELL A LI
The figures involved in a Lionel Messi deal probably mean that signing him would represent an even bigger outlay than Chelsea’s entire lavish spend. The Sun have an update on Manchester City’s move.

While the most recent claim was that a swap deal involving Gabriel Jesus, Riyad Mahrez and Bernardo Silva, plus £90m, was being discussed, that appears not to be the case. Those three ‘are off limits’ and ‘untouchable,’ which means the same thing but does reiterate the point.

Pep Guardiola sees those three as the ‘core’ to his side going forward, but two players would be made available for Barcelona to ponder: Angelino and Eric Garcia.

Both have been linked with the Catalan club, the former last week and the latter since it became clear he does not intend to extend his City contract. That might bring the £631.3m buyout clause down by £30m or so.