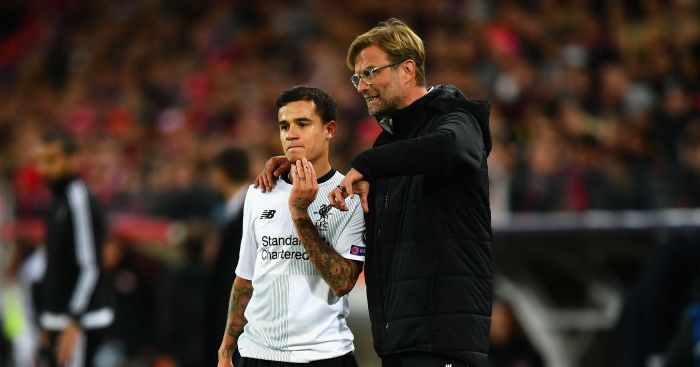 Coutinho issues come-and-get-me plea. And Chelsea in for Corona.

They are reportedly willing to listen to offers of £45million for the playmaker they paid Liverpool £130million for in 2018, and will even pay part of the Brazilian’s wages if  another loan move can be agreed.

Philippe Coutinho hatches a plan to secure a return to Liverpool and the latest on Jadon Sancho’s future on a packed @sundayworld back page #LFC #MUFC pic.twitter.com/zQ8iycYUwK

Chelsea, Spurs, Arsenal and Newcastle have all been linked with the Brazilian at one point or another.

According to Sunday World, Coutinho has ‘hatched a plan’ to secure a return to Liverpool. A plan you say?

It’s not quite as devious a scheme as the Irish newspaper would have you believe – he’s apparently just asked Klopp if he’ll take him back at Liverpool. You dastardly devil, Phil.

FEATURE: Klopp might be facing his biggest Liverpool challenge yet

JESUS! CORONA!
Two certainties in the pandemic lockdown: you were made aware of Jesus Corona scoring the first goal on the resumption of the Primeira Liga in at least three WhatsApp groups; Marina Granovskaia and Frank Lampard will attempt to sign anyone they see playing well on TV. *Merge fingers a la David Brent*.

That’s right, according to A Bola, Chelsea are interested in signing Corona, who has now scored both of Porto’s goals since the restart.

The Mexico international has four goals and 17 assists in all this season, and could be available for as little as €30million.

With Chelsea already signing Hakim Ziyech and all but securing Timo Werner, there could be little space for Corona. But with the club seemingly near the front of the queue for both Kai Havertz and Ben Chilwell, their transfer business appears far from over. Poor old Tammy.

TAKE THE MKH
Arsenal don’t have the rainy day fund of Chelsea, and will have to be a bit more savvy to sign new players this summer.

According to The Sun (we know), one of the players they believe they can snap up on the cheap is Justin Kluivert.

Henrikh Mkhitaryan has spent the season on loan at Roma from Arsenal, and the Serie A side are reportedly hopeful of a similar deal for next season. But the Gunners want to use the Armenian as a makeweight in the transfer of Kluivert to the Emirates.

Roma value the 21-year old at £35million, but Arsenal hope to knock at least £10million of any deal by inclusing Mkhitaryan in part-exchange. Both parties are represented by Mino Raiola, so this one may have more legs than most.