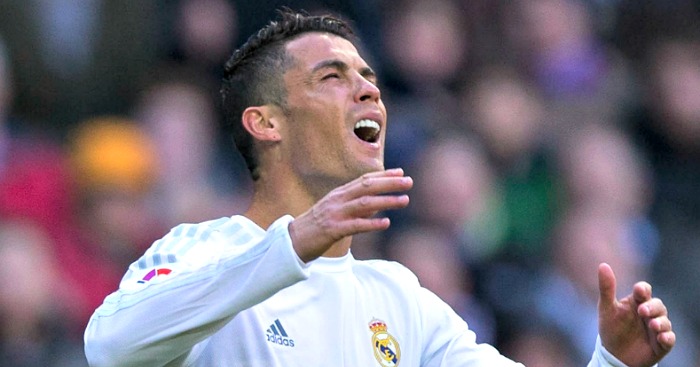 CASE FOR THE DEFENCE
Jose Mourinho has had over two months to prepare his transfer shortlist for when he definitely, certainly, surely is appointed Manchester United manager. Reports in Spain tell us he has five targets for the summer. We yearn for the halcyon days where he was linked with an interest in 12 players within a matter of hours.

According to Spanish daily Sport, Mourinho has identified five defenders he wants to sign when he becomes manager, which is definitely going to happen. Sit back and marvel at the new names they produce. Some bloke called John Stones at Everton. A randomer named Raphael Varane, who plays for Real Madrid. Some nobody called Marquinhos at Paris Saint-Germain. A bloke from Barcelona called Marc Bartra. Some fella from Athletic Bilbao called Aymeric Laporte. We have never heard of any of them, nor have any of them been linked with Manchester United before. This is all new news. Honest.

The report adds that Stones, Marquinhos and Laporte are all also wanted by Barcelona. United are unlikely to win those battles, leaving them with the Barca cast-off that is Bartra. Oh yes, and Varane, who will definitely leave Real Madrid for a club whose Champions League qualification remains uncertain.

You might have heard the Portuguese’s quotes at the weekend. After a derby defeat to Atletico Madrid, he said: “If we were all at my level, maybe we would be leaders.”

The comments were since clarified by the 31-year-old, who said: “When I said this I was referring to my level of fitness, not play. I am not better than any of my teammates.”

We believe you, Cristiano. Anyway, Spanish outlet El Confidencial predictably tell us that Ronaldo’s words have ‘pushed him closer to the exit door’. United, even more predictably, are linked.

MORE LAPORTE
Manchester United and Barcelona are credited with an interest in Aymeric Laporte on Monday morning, but so are Manchester City.

‘Pep Guardiola wants to bring Athletic Bilbao defender Aymeric Laporte to Manchester City… for £80million,’ reads the snappy headline on The Sun’s website. £80million? That’s a lot for a 21-year-old with only 100 career league appearances, especially considering his release clause is around £39.3million.

‘The Frenchman, 21, would set the Etihad side back a whopping £80million on transfer fees and contract perks.’ For fu…

They do add that City are the favourites to sign the France youth international.

AND THE REST
Manchester City are set to hijack Liverpool’s move for Barcelona’s second-choice goalkeeper Marc-Andre ter Stegen…Title-chasing Tottenham are ready to ease the burden on star striker Harry Kane in the summer, with Napoli’s Lorenzo Insigne and Juventus’ Mario Mandzukic thought to be top of Mauricio Pochettino’s list…Arsenal are in talks to re-sign Havard Nordtveit when his Borussia Monchengladbach contract expires in the summer…Manchester United have been handed a huge boost in their bid to land long-term target Saul Niguez – as the Atletico Madrid man has rejected a new contract offer from the club…Arsenal are weighing up a move for 20-year-old Newcastle winger Rolando Aarons, who has failed to agree a new contact with the Magpies…New Everton shareholder Farhad Moshiri will provide the Goodison Park club with £100m investment in the summer…Newcastle are keen to sign Lyon defender Samuel Umtiti, 22, if they can avoid relegation from the Premier League…Deportivo are keen to take Aston Villa midfielder Carlos Sanchez back to La Liga in the summer.