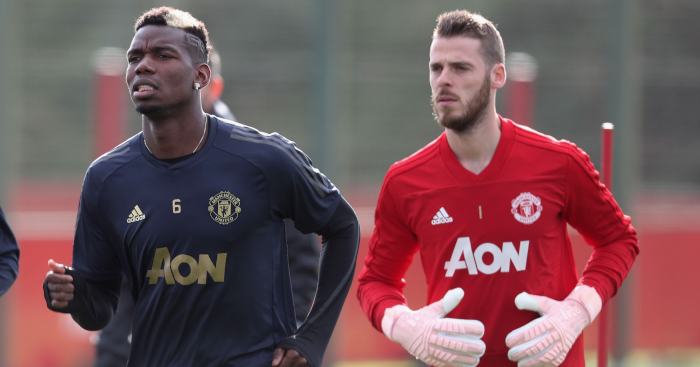 UNITED MAY OFFLOAD DE GEA
There have been plenty of whispers around this week of Manchester United having to sell some of their assets to raise money to fund the next phase of their squad rebuild. It was presumed the sale of Paul Pogba might be enough to swell the club’s coffers, but with his value depreciating with each week he can’t be bothered, Ed Woodward might take some of Ole Gunnar Solskjaer’s other players to market.

One of those could be David De Gea. The Spain goalkeeper is in his ninth season at Old Trafford and it may turn out to be his last, according to Goal.

De Gea signed a new contract not long ago but, apparently, the concerns he had over committing his future to the Red Devils haven’t gone away, From United’s perspective, they feel he is no longer as indispensable as he once was, with Sergio Romero and Dean Henderson seen as capable of filling the void.

Where might De Gea go? United would only sell abroad and with no obvious route back to Spain, it seems that PSG and Juventus are his most viable options. But Wojciech Szczesny recently signed a new long-term deal at Juve and Keylor Navas has been used to De Gea’s shadow following him everywhere for most of the last decade.

If De Gea goes, then United could end up giving Pogba a new contract. In which case they might as well replace the club badge with the midfielder’s emoji and rename Old Trafford the Raiola Bowl.

REAL EYE SALAH DEAL
Real Madrid might not be bothered with Pogba or De Gea this summer because their attention is focused on Mo Salah.

That’s the story according to El Desmarque. Apparently, Real reckon they might be able to get hold of the Liverpool star for £126million should they shift Gareth Bale off their books.

Bale has shown no appetite to aid Real’s fundraising drive while Liverpool would be even more reluctant to satisfy Florentino Perez’s whims at that price.

Perez would prefer Kylian Mbappe but it is thought the PSG star would cost double what Salah might. Though why the Reds would consider doing business at that price is beyond us, even if Salah might fancy it.

BAYERN MAKE CONTACT WITH FIRMINO
Liverpool are also fending off interest in another of their front three.

The Liverpool Echo says Bayern Munich have been in touch with Roberto Firmino’s representatives to see if the Brazilian fancies a return to Germany.

It seems the links with Timo Werner have prompted Bayern to ask the question, but Liverpool apparently have no desire to sell any third of their forward line to make room for the RB Leipzig attacker.