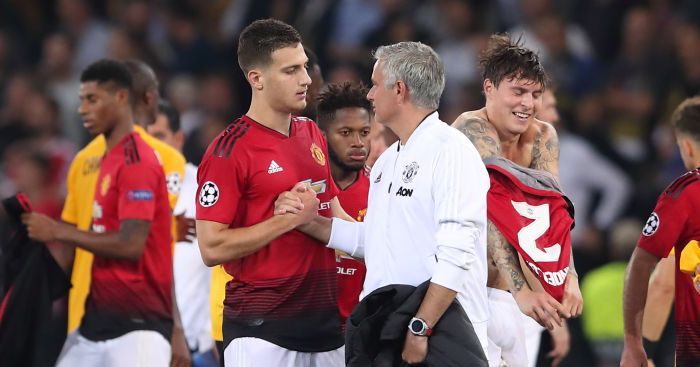 Man United want to raise around £100m by selling up to five players. Enter Mourinho, Spurs and a £35m bid.

DALOT TO LOSE
In his age group, he is the best full-back in Europe,” said Jose Mourinho of new Man United signing Diogo Dalot in June 2018, causing many a Liverpool fan to frantically search the name of Trent Alexander-Arnold and discover there is but five months between them.

It turns out the Portuguese might have been mistaken. Dalot ‘is already fighting’ to stay at Old Trafford after Aaron Wan-Bissaka’s emergence at right-back.

That ‘has changed Ole Gunnar Solskjaer’s future plans,’ and The Sun now say Man United ‘would consider’ offloading the player ‘if a sizeable offer was to come in’.

It would be part of ‘a huge squad overhaul’ with up to five players sold, generating around £100m. Those named are Chris Smalling, Phil Jones, Jesse Lingard, Andreas Pereira and Paul Pogba, but they are to be expected. Getting rid of Dalot would be something of a surprise; could they not just use him a little further forward?

Man United would only contemplate the deal if ‘a fee of around £30m to £35m’ was offered. And perhaps it’s just Daniel Cutts being exclusively cheeky, but he adds that Mourinho ‘could even be tempted to make a move to bring him to Tottenham’.#

Could Manchester United finally make a profit on a player?

COUT ON SIGHT
It seems as though Philippe Coutinho might finally be returning to the Premier League. Spanish publication Sport say he is ‘keen’ to come back to England and Chelsea ‘are working on building a team’ to challenge Liverpool and Manchester City.

At the forefront of that would be Coutinho, and the Blues ‘have begun talks over a deal’ with Barcelona. Bayern Munich will not activate the option to buy the Brazilian permanently so Chelsea have a clear run.

Frank Lampard and the boys ‘have no intention’ of spending such lavish amounts either, so the club-record fee of £79.3m that Barca want seems unlikely to be met. But they ‘believe they have other factors in their favour’, namely Coutinho’s ‘desire’ to return to the Premier League and Barca’s need to raise funds to sign Lautaro Martinez.

BALE MONEY
In a rather surprising turn of events, Gareth Bale is now ‘certain to stay’ at Real Madrid due to the global pandemic.

Bale ‘has been determined to stay’ in the Spanish capital but Real were eager to offload him and his gargantuan wages. But now Real ‘are unlikely to buy any Galacticos,’ it seems as though ‘they will be happy for him to stay’.

This comes from The Sun, who add that Bale ‘now looks likely to see out his contract’. It expires in 2022, so good on him.

AND THE REST
RB Leipzig and Germany forward Timo Werner could be preparing for a move to the Premier League by taking English lessons, with Liverpool and Chelsea both interested in the 24-year-old… Real are prepared to offer up Serbia striker Luka Jovic, 22, to Napoli in an attempt to bring down the £70m price of 24-year-old Spain midfielder Fabian Ruiz, who is also a target for Manchester City.