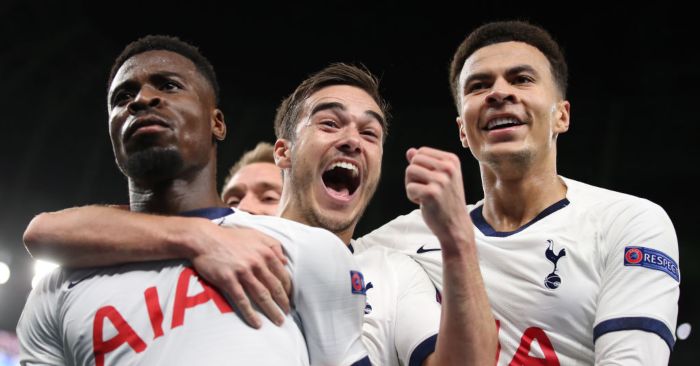 EVERTON MAY TAKE JOSE’S REJECTS
With Tottenham certain to win the Premier League, it seems that Carlo Ancelotti is willing to take on Jose Mourinho’s cast-offs…

Football Insider reckons Everton are ‘preparing to keep close tabs’ on three players unable to get look in at Spurs right now.

Dele Alli, Harry Winks and Paulo Gazzaniga* have all seen their status plummet this season, with the two England internationals watching their Euro 2020 hopes disappear from the sidelines at White Hart Lane.

It is thought that Everton could look to sign either or both of Alli and Winks on loan, while Gazzaniga, who has been replaced on the Spurs bench by Joe Hart, will be available on a permanent deal.

The report states that Gazziniga could be an option after Everton failed to sign Sergio Romero in the summer. But they did bring in Robin Olsen for the season and the Roma loanee has suggested Ancelotti has ‘a plan’ to get him more game time, which seems hard to fathom unless Everton are planning on selling Jordan Pickford.

JUVE STAR EYES TOFFEES MOVE
Like that Spurs trio, Sami Khedira can’t get himself a game at the moment. And the Juventus midfielder is also being linked with Everton.

According to Calciomercato, the former Germany star wants to get away from Juve in January having been told prior to the start of the season that he didn’t feature in Andrea Pirlo’s plans. Juve reportedly offered to allow Khedira to tear up his contract a year early, but the 33-year-old chose to stay and bank his wages.

Now, though, Khedira wants to move on and his focus is said to be on the Premier League. This report says the prospect of a deal with Everton is ‘more than just an idea’ and the former Real Madrid star is fit and raring to go after a couple of injury-hit seasons. And one, so far, which hasn’t yet begun.

SALIBA TO PAY FOR ARSENAL EXIT
William Saliba appears to have taken the hint, and yesterday’s news that Arsenal are targeting yet another centre-back in January could not have made it less subtle.

The French defender is said to be ‘fed up’ with not getting a look in at Arsenal, and Mikel Arteta feels much the same way about the situation.

According to Canal+, Saliba wants to return to St Etienne in the New Year, where he spent last season on loan but injuries and Covid prevented him from making the progress he might have hoped.

So desperate is he to rejoin the Ligue 1 club on loan, he is said to be willing to take a drop in wages to around £21,000 a week.

It is being claimed that Inter Milan could sell the Denmark playmaker for as little as £12million in January, and that bargain price ‘will appeal to Arsenal’.

*Buy Paulo Gazzaniga and thousands of other players on Football Index. 18+, UK and Ireland customers only, begambleaware.org. T&Cs apply.