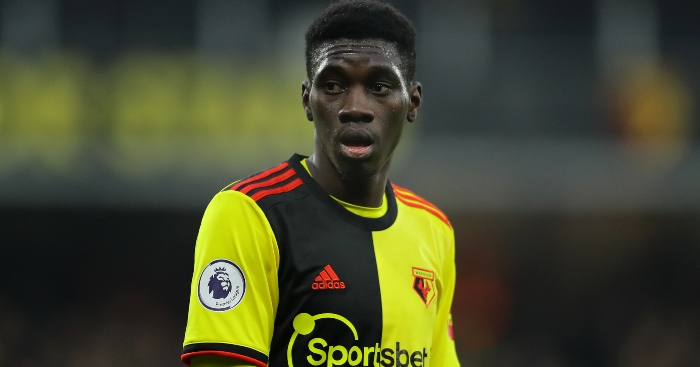 MAN UTD LEAD LIVERPOOL IN WINGER CHASE
It probably won’t bother Liverpool fans too much while they furiously pleasure themselves over the prospect of Thiago pulling the strings in Jurgen Klopp’s midfield but the Reds could be about to lose one of their other transfer targets to Manchester United.

Ismaila Sarr had been identified by Klopp as a possible recruit to provide some back up for his front three, but The Independent claims United are now better placed to land the Watford winger who is viewed as another alternative to Jadon Sancho. The 427th we think, though it’s possible we lost count somewhere around Ivan Perisic.

Apparently ‘intermediaries are understood to have made initial enquiries’ over Sarr, who was one of the few Watford players to emerge from last season with any great credit. United would have to cough up ‘at least £30million’ which seems fair since the Hornets shelled out around £40million to make the 22-year-old their record signing last year.

UNITED LINKED WITH FORMER MOYES TARGET
United are also being linked this morning with Sami Khedira. Which might have been exciting six or seven years ago…

The Sun throws United’s name in the mix while reporting that Khedira could leave Juventus for free in the coming weeks since Andrea Pirlo has no intention of using him this season.

The 33-year-old midfielder still has a year remaining on his contract at Juve and the United link appears to be based on nothing more than the fact David Moyes once tried to sign him while he and Ed Woodward were shambling their way towards the end of their first transfer window together in 2013.

SPURS FAIL IN INGS APPROACH
Similar to their Liverpool counterparts, Tottenham supporters are perhaps too busy getting in a fluster over Gareth Bale’s homecoming to notice the custard pie being hurled their way from Southampton.

It was reported on Thursday that Spurs had made an enquiry over a possible deal to sign Danny Ings since Harry Kane is Jose Mourinho’s only recognised centre-forward. The Guardian says Daniel Levy was given the shortest of shrifts by the Saints, who were willing to entertain Spurs’ interest in Pierre-Emile Hojbjerg earlier this summer but have absolutely no interest in selling Ings.

It was rumoured that Alli could swap places with Bale at Real Madrid and though that is no longer on the cards, the Daily Mail says PSG and Inter Milan are currently sniffing around the 24-year-old.

PSG were also said to be interested in Danny Rose but they presumably saw the Amazon documentary too and are no longer interested in the left-back. However, Le10Sport says West Ham and Aston Villa remain keen on the former Newcastle loanee.