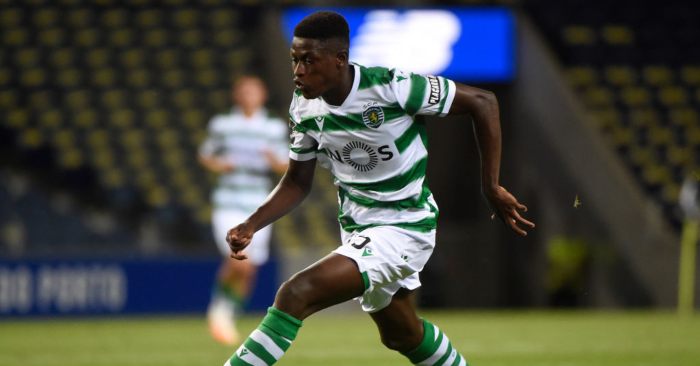 SANCHO HAS TO ‘PUSH’ FOR MAN UNITED
‘Jadon Sancho will have to push to get himself a dream move to Manchester United,’ is the opening line in the Daily Mirror, who report that Borussia Dortmund and Man United are ‘deadlocked’ over a transfer fee. Now quite how Sancho could make Dortmund accept less than £100m or United bid more than £100m is unclear, so we will leave that to your imaginations.

‘Dortmund do sense already that Sancho is ready to move to this summer and there has been huge interest in him with Chelsea, Liverpool, Real Madrid and even his former club Manchester City all linked,’ say the Mirror. Are we really to believe that Sancho is so set on United that he would turn down moves to any and all of those clubs are force through a cut-price move to Old Trafford?

MAN UNITED AND LIVERPOOL WANT NUNO
Nuno Mendes, 18-year-old Sporting Lisbon left-back, that is. According to calciomercato, Jurgen Klopp is ‘bewitched’ by the youngster, who has a £40.9m clause in his contract. But there is competition from Manchester United and also from Juventus, who see him as a long-term replacement for Alex Sandro.

Juventus have quite the advantage with the trump card of Cristiano Ronaldo, though United can make a compelling case after Bruno Fernandes has been such a success at United; they are all represented by Jorge Mendes, so Nuno is likely to go wherever suits Jorge.

DOUGLAS COSTA HOW MUCH?
Hmmm. This might be wishful thinking on the part of Juventus, but Tuttosport claim that Manchester City want Brazilian winger Douglas Costa, which might provide some of the funds for an Old Lady striker search. Now hands up if you believe that City will pay £45m for a winger about to turn 30 who has started only six Serie A games this season thanks to a combination of form and fitness. We cry nonsense.

According to Tuttosport, via a dodgy Google translate: ‘Pep Guardiola has targeted his pupil of Bayern times and is ready to challenge Paris Saint Germain. It could be a 40-50 million deal with bonuses. Money that Juventus would reinvest immediately in the hunt for number 9. On balance, the sacrifice of the 29 year old Brazilian could facilitate the race for the center forward of the post Higuain.’

JIMENEZ ATTRACTS OLD LADY
As you read above, Juventus want a striker. And who do they want? Well, they want Wolves’ Raul Jimenez (or Arkadiusz Milik or Edin Dzeko or Alexandre Lacazette, but mostly Jimenez, who is also a target for Manchester United. And it is thought that Jorge Mendes connections will get them the Mexican.

But Wolves will want players as well as money for Jimenez and a whole host of players are mentioned – Daniele Rugani, Adrian Rabiot, Aaron Ramsey – but it seems that the English club wants centre-back Merih Demiral, who has had a difficult year since moving from Sassuolo last summer.

AND THE REST
West Ham have joined the list of suitors for Wigan full-back Antonee Robinson…Mario Gotze could join Niko Kovac at Monaco…Galatasaray are making progress in their attempts to sign Aston Villa midfielder Trezeguet…Alexis Sanchez will join Inter Milan on loan again…Brighton, Burnley, Leicester and Everton all want Adam Lallana.