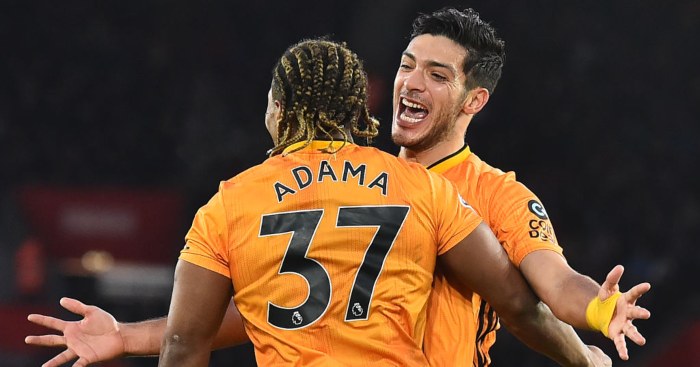 Man Utd will be concerned at the new transfer plans of Chelsea and Liverpool. Jadon Sancho and Raul Jimenez are wanted men.

PARD BARGAIN
The accepted wisdom was once that Man Utd will sign Jadon Sancho this summer. But with cheaper alternatives being targeted and Chelsea selling half their squad to fund a move themselves, that might no longer be the case.

The Daily Express report that nine players could leave Stamford Bridge to help Frank Lampard sign three: Sancho, a striker and a left-back.

Two in particular would theoretically generate the most funds. Reports from France suggest Tiemoue Bakayoko is wanted by PSG after impressing back at Monaco, while Spanish newspaper Marca say Atletico Madrid are ready to sign Alvaro Morata permanently.

La Liga could have something to say about that.

The first move could bring in £31m and the second requires £47.8m to be paid to Chelsea. Both would seem incredibly ambitious even if a global pandemic hadn’t shattered football’s fragile financial visage.

But that ‘huge windfall’, as well as any money they receive for Michy Batshuayi, Emerson Palmieri, Davide Zappacosta, Victor Moses, Jorginho, Marcos Alonso and Kepa Arrizabalaga, will earn ‘a huge windfall’ that will help Frank Lampard oversee ‘a major overhaul’ of his squad.

To be able to challenge Man Utd for the £120m signing of Sancho would be their first hope. So we are still pretending football will carry on as normal.

RASH DECISION
The idea that Liverpool have ‘cooled their interest’ in anyone is quite entertaining, considering they decided earlier this month that this would be their second consecutive summer of no major signings.

But Sky Sports insist that their withdrawal from the race for Milot Rashica is only recent, despite the apparent reason being that they already signed ‘a player of similar profile’ in Takumi Minamino in January.

Liverpool’s interest in the Werder Bremen striker had actually been confirmed but plans have understandably changed.

Aston Villa, Brighton, West Ham and Wolves remain ‘keen’ to bring in a forward with a £33m release clause. How could he possibly be expected to decide between the teams in 19th, 16th, 15th and 6th? It really is Sophie’s choice. Except three of her children are constant disappointments and the other is quite good.

RAUL THE DICE
Of course, the actual reason Liverpool don’t want Rashica is not because of a desire to protect their financial future or to respect the current situation, but to save up to sign Raul Jimenez.

This comes from Don Balon, so there is not enough sodium chloride in the world to accompany it, but Jurgen Klopp reckons Jimenez would suit ‘his project’ at Liverpool and the feeling is mutual. The Wolves striker ‘has fallen exhausted at the feet of the German’ and ‘loves him as a coach’.

Jimenez is insistent on not joining Real Madrid because of his difficult experiences in the Spanish capital with Atletico. Man Utd and Tottenham both want him, too, but any interested club is looking at parting with at least £100m, if reports from earlier this year are to be believed. Which they aren’t. As is the case with any nugget of transfer speculation that involves nine-figure signings right now.

AND THE REST
Midfielder David Silva’s contract with Manchester City is due to end on 30 June but the Spaniard, 34, is willing to extend it until the end of the campaign, his last with the club… Chelsea target Dries Mertens is looking to stay in Serie A if his Napoli contract runs out, with Inter Milan also interested in the 33-year-old Belgium forward… Southampton’s English striker Che Adams is set to be made available in the summer for £10m or less – despite Championship side Leeds United agreeing a £19m fee for the 23-year-old in January before changing their mind… Leeds United could make a move for Tottenham Hotspur and Argentina defender Juan Foyth, 22, if they are promoted to the Premier League.