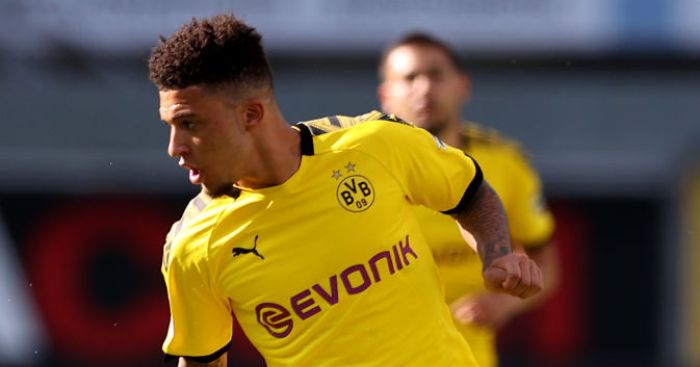 Liverpool could not afford Timo Werner but may make an exception for Jadon Sancho, leaving Manchester United with Thiago Almada.

MONEY MATTERS
The sensible conclusion to draw from Chelsea’s imminent signing of Timo Werner is that Liverpool only missed out on a deal for financial reasons. That much has been stated implicitly; the striker will cost £106m, after all.

Yet when it comes to Jadon Sancho, a player they have been only tentatively linked with in the past, ‘funds will be found’ if Jurgen Klopp ‘does want the player that badly’.

That is the claim from The Independent, who suggest that Liverpool ‘are monitoring’ developments with regards to the Borussia Dortmund winger and ‘may yet challenge’ Real Madrid and Manchester United for his signature.

Liverpool are even said to be seen ‘as a more attractive option’ by Sancho, who sees Champions League participation – and getting his hair cut – as ‘a priority’. The Reds ‘would sense an opportunity’ if United miss out on Europe’s elite competition next season but financial ‘constraints’ remain a pressing issue.

Signing Sancho could cost at least £80m and his wages would likely require an increase to the earnings of Virgil van Dijk, Sadio Mane and Mo Salah. United’s ability to ‘financially trump’ Liverpool, as well as ‘the expectation’ he will leave this year, might mean a deal is beyond the Premier League leaders.

But ‘there is also a feeling’ that FSG could finance the move if Klopp is insistent. That, it is suggested, would likely depend on either Mane or Salah leaving. Stay tuned.

Does Werner make Chelsea ‘one of the most exciting teams?’

SPANISH ARGENTINEAN ALMADA
Missing out on Sancho would mean a change of plans for United and another glance at their list of alternatives.

One such player is the ‘very interesting’ Thiago Almada, who ‘has very good conditions to succeed at Old Trafford’, if our old friends Fichajes are to be believed.

The 19-year-old winger has attracted the attention of Arsenal and Atletico Madrid in recent weeks but United ‘will take the cat to the water’ as they ‘really like his versatility’, speed, dribbling and ‘great vision of the game’.

Velez Sarsfield will hold out for the full €22m (£19.6m) release clause of a player ‘ready to make the big leap to Europe’.

BAYERN TIME
But United could also be disappointed in their pursuit of Kai Havertz, as Bayern Munich ‘are confident of beating a series of major European clubs’ to his signature.

This, again, comes from The Independent, who suggest Havertz ‘currently favours the German champions’ despite rumours of interest from United, Liverpool, Chelsea and Real Madrid.

He was said to be ‘open’ to moving to Old Trafford but Bayern are at ‘a much more advanced stage of talks’ than anyone, and ‘look set to beat all opposition’.

Leverkusen have ‘accepted’ the player will leave this summer and would therefore ‘prefer to conclude a deal quickly’ to reinvest the likely £80m fee.