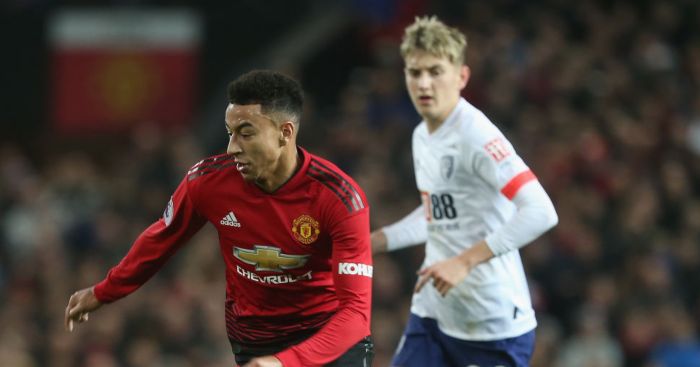 This gossip column is sponsored by Arsenal, Bournemouth and Man Utd.

THE BROOKS OF THE MATTER
It’s never really explained as to why Bournemouth are ‘planning a change of tactics’ in their transfer approach. But The Sun are here to inform us that the Cherries are ‘open’ to selling Callum Wilson, Josh King and David Brooks.

While Chelsea have previously been interested in Wilson and King almost returned to Old Trafford in the winter, it is Brooks who could instigate some sort of bidding war. Man Utd and Tottenham ‘could rekindle their interest’ if a player who has been out with a long-term injury since July ‘proves his fitness’.

JESSE AIMS
Perhaps Man Utd will target Brooks as a replacement for one of their most promising young players? The Athletic run through the potential options for the unwanted Jesse Lingard.

Liverpool, Manchester City, Tottenham and Chelsea are ruled out. ‘Not in a million years,’ apparently. But Pep Guardiola would love him. Burnley, Leicester, West Ham, Bournemouth, Southampton and Newcastle are similarly ruled out completely.

He would not represent ‘value’ for Norwich, Aston Villa, Crystal Palace or Brighton, while Everton have no need for a player in that position and Wolves and Sheffield United probably don’t need him. Watford are a possibility with Lingard ‘an ideal player to plug the gap’ left by Abdoulaye Doucoure or Roberto Pereyra if they leave.

The point is that he does not have many obvious destinations if he stays in the Premier League. But Arsenal are mentioned as ‘hard to rule out’ as ‘they are also going to need midfield reinforcements’ in the event that Dani Ceballos does not join permanently.

Arsenal and Man Utd ‘have a history of transfer dealings’ and the latter’s ‘change in approach to recruitment’ could see Raul Sanllehi utilise his extensive list of contacts to tempt Lingard south.

SAVING PRIVATE RYAN
And our friends over at TEAMtalk suggest Arsenal are ‘confident’ of signing Ryan Fraser from Bournemouth, thus completing this gossip column’s rather neat full circle.

Man Utd went for the £15m winger in January to no avail, and Arsenal now ‘believe they are leading the chase’ to sign him. Fraser ‘has plenty of clubs interested in signing him’, owing to his expiring contract, but the Gunners ‘are in pole position’.

Will Bournemouth have any players left when football starts again?

AND THE REST
Philippe Coutinho could leave Barcelona for Chelsea as a direct result of Jadon Sancho’s refusal to move to Stamford Bridge… Islam Slimani could move to Sporting Lisbon with no sign of his Leicester career being salvaged… The Foxes want 30-year-old Fenerbahce defender Hasan Ali Kaldirım… West Ham will explore a move for Freiburg centre-half Robin Koch… Newcastle will revisit their interest in Lille midfielder Boubakary Soumare, the subject of their failed club-record bid in the winter.