Chelsea need to raise funds for the 'new JT' while United want yet another goalkeeper. 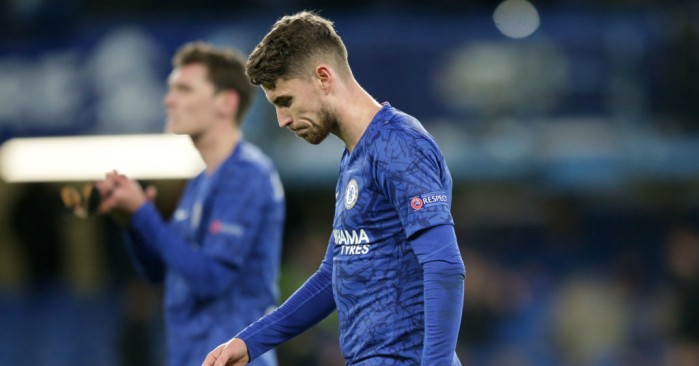 SACRI-RICE
Jorginho has been linked with a Stamford Bridge exit ever since his cigarette-butt-chewing mentor Maurizio Sarri left the club. And Frank Lampard is now willing to listen to offers for the Italian midfielder, in an attempt to raise £65million for Declan Rice.

Reports had suggested that Chelsea would avoid signing Rice to ‘avoid the embarrassment’ of re-signing a player they let leave for nothing for a large fee. A slightly odd line given they would presumably be quite keen on reuniting with Kevin de Bruyne given the chance. And they now appear to have accepted the prospect of being a little red-faced.

Chelsea see Rice as ‘the new John Terry’; they have sorely missed a dominant leader in the centre of their defence. Ross Barkley and Michy Batshuayi have reportedly been offered to the Hammers in part exchange, but the Telegraph claim the Blues see the sale of Jorginho as the most effective way to raise the funds for Rice.

The former Napoli star is one of a few Chelsea players Lampard is ready to ditch, and the Sarri-led Juventus could be at the front of the queue to land him. Although how long Sarri remains as boss of the Bianconeri remains to be seen following their disappointing exit from the “cursed” Champions League on Friday.

UNITED WANT ALL THE GOALKEEPERS
What do you do when you’ve got too many goalkeepers? ‘Scout’ another one, of course. Not satisfied with the goalkeeping headache he has already, Ole Gunnar Solskjaer wants to add another one into the mix, according to the Daily Star.

The report claims Solskjaer is planning for the exit of either David De Gea or Dean Henderson in the next 12 months, by scouting Napoli’s Alex Meret.

Solskjaer has maintained that De Gea remains Manchester United’s No 1, meaning Henderson would have to start on the bench were he to return to Old Trafford from his successful loan spell with Sheffield United. Henderson’s ultimatum means they may listen to offers for the 23-year-old, with Chelsea reportedly interested.

But even if Henderson did leave, they’ve still got De Gea – who wasn’t as terrible this season as the noise surrounding him suggests – as well as one of the best backups in the Premier League in Sergio Romero.

Alex Meret is a perfectly serviceable goalkeeper, but he’s been in and out of the Napoli side, sharing the duty with David Ospina. He’s not as good as the three they already have.

‘INTENSE TALKS’ FOR SKRINIAR
Jose Mourinho is in the market for defensive reinforcements following Jan Vertonghen’s departure, and the Portuguese boss is said to be keen on Inter Milan’s Milan Skriniar, with ‘talks intensifying’ ahead of a possible deal.

The Slovakian – previously linked with United, City and Liverpool – has been a first team regular for Inter this season but has recently fallen out of favour with Antonio Conte, who started him just once in the last five games.

And Tuttosport (via Sport Witness) claim he ‘could be sacrificed’ if Inter received a player in return. The Serie A side are thought to be keen on ending Tanguy Ndombele’s Tottenham nightmare, but Mourinho is hoping the club’s record signing will show what he’s worth in north London next season.