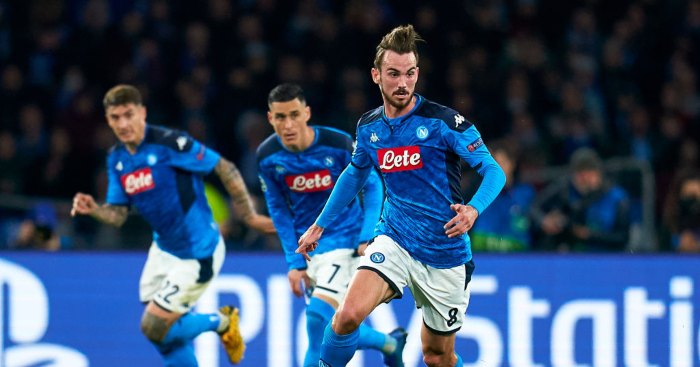 We wonder how much room Jurgen Klopp has on his top targets list as Liverpool eye up a Serie A midfielder.

Ruiz is expected to leave Napoli this summer, with the his relationship with the Serie A giants becoming increasingly strained with his agent, Alvaro Torres, claiming this week that Champions League clubs had an eye on his client.

The report says that ‘Napoli would like to extend his contract’ but the likes of Liverpool have been joined by Bayern Munich and Manchester United in the race to sign Ruiz, who is reportedly valued at £74m. The Daily Express adds that Liverpool boss Klopp ‘wants to strengthen his midfield this summer and he has put Ruiz at the top of his wanted list’.

“There have been many changes in the club this season, it’s been a difficult year for Napoli,” Torres said.

“A renewal? We have set aside negotiations for a while, until the end of the season.

“There are very important clubs that have asked for information, and we have already informed Napoli. There is no release clause in his current contract. I really don’t know what Ruiz’s value is at present.”

INTER READY TO RUIN MAN UTD PLAN
Manchester United are preparing a £50m offer for Arsenal striker Pierre-Emerick Aubameyang, The Sun reported on Friday. Aubameyang has arguably been Arsenal’s best player this season having scored 20 goals in 32 games in all competitions.

But the Gabon international has just over a year left on his current deal and, as such, speculation over his future has heightened in recent months. The Arsenal striker has been strongly linked with a move to a Champions League club, leaving both club and player to make a decision this summer.

And now the La Gazzetta dello Sport claims Inter Milan could mess up Man Utd’s plans to bag the Arsenal striker with Lautaro Martinez in danger of leaving the San Siro with Barcelona and Chelsea interested. Their plan is to boost their forward line in the next transfer window if they lose Martinez and Aubameyang is one of two targets they are considering, along with Chelsea striker Olivier Giroud.

FOUR PREMIER LEAGUE SUITORS
Another day, another Philippe Coutinho transfer story. This time the Daily Mirror makes sure all bases are covered by claiming that a Premier League quartet are after the Brazil international.

‘Chelsea, Manchester United, Arsenal and Spurs have all enquired’ over their chances of landing Coutinho at the end of the season with Bayern Munich not wanting to make his deal there permanent.

Coutinho had to endure a frustrating 18 months at Barcelona before making the switch to Germany. The 27-year-old spent a successful five years at Liverpool before making the huge move to Barca in 2018. The Mirror adds that similarly to Bayern, none of the interested Premier League clubs are interested in a permanent deal and ‘all want him on loan’.

Paul Pogba’s controversial agent Mino Raiola and Manchester United chief Ed Woodward are talking again…Manchester United stars will return to training on April 10 in readiness for a return to action in May…Arsenal are considering a summer move for Celtic forward Odsonne Edouard as they aim to build ahead of next season…Manchester United, Liverpool and Chelsea are among a number of top Premier League clubs who could scale back their transfer window…Representatives of Paris Saint-Germain forward Neymar have told Barcelona the Brazilian wants to leave France and return to the Nou Camp…Arsenal have been encouraged to sign Burnley’s New Zealand striker Chris Wood, 28, as a replacement for Pierre-Emerick Aubameyang if the Gabon international decides to leave this summer…The Premier League is scheduling a tentative plan for games to start after 1 June, allowing the season to be finished within six weeks and the 2020-21 campaign to begin on August 8…UEFA are set to go easy on Financial Fair Play rules for this season and next – but Manchester City will remain banned…