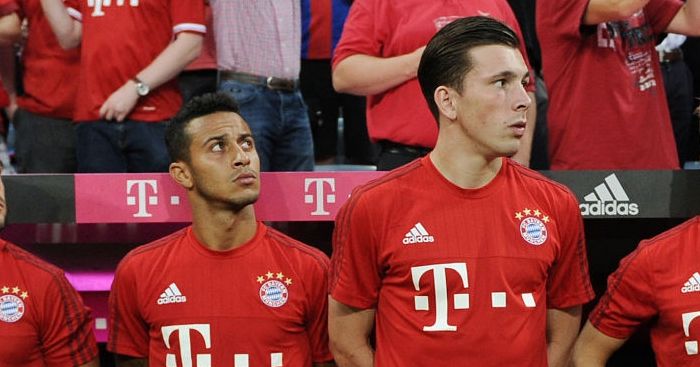 Jurgen Klopp has ‘given the order’ for Liverpool to sign Thiago. They want to pay less than Everton have bid for Hojbjerg.

ALL SYSTEMS THIAGO
Words cannot describe how devastating it is not to have a Bild account at this very moment, as the German newspaper has gone awful big on the Thiago to Liverpool claims.

While some continue to suggest an injury-prone 29-year-old does not suit the Anfield profile, it turns out Thiago is actually quite good and very much available.

Bild insist he ‘will leave’ Bayern Munich this summer and ‘his goal’ is to join Liverpool. Jurgen Klopp, in response, has ‘given the order’ for the Reds to sign him.

It is claimed that an agreement has already been reached between the player and club. But that one small obstacle remains: a fee. Liverpool now want to pay nothing more than £22.5m, while Bayern will hold out for £36m or so. This will rage on.

Only shame is that Liverpool brilliance will escape history books

PIERRE PRESSURE
Such midfield penny-pinching does not extend across the entire Mersey. Everton have offered more for Pierre-Emile Hojbjerg than Liverpool are willing to pay to purchase his former Bayern teammate.

The Evening Standard say ‘an official approach’ has been made by the Toffees, with Southampton ‘yet to respond’ to an offer ‘worth up to’ £25m.

Tottenham could also get involved but a bid from north London is said to be ‘far from imminent’. If they do get involved, a swap with Kyle Walker-Peters is likely to try and bring Southampton’s £35m demands down a little.

MAKE EMILE OF IT
The BBC go a little further into the details of Everton’s bid, stating it is £14m plus add-ons. Sky Sports go against the grain of Tottenham being yet to act by claiming they are ‘locked in talks’ over Hojbjerg.

They add that the 24-year-old ‘would prefer’ to join Spurs, whose interest is long-standing.

According to The Guardian, Everton’s bid is of £18m and Southampton ‘are hopeful’ that Tottenham can improve on that. Jose Mourinho reckons the player, in the final year of his contract on the south coast, can ‘rebalance his midfield’.

Oh, and the Hojbjerg and Walker-Peters deals ‘are being treated as separate entities’.

We are frankly none the wiser.