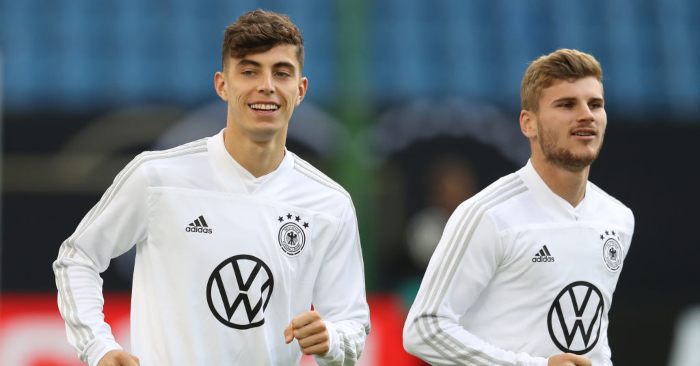 Kai Havertz to Chelsea now? This time it is Manchester United who will miss out, though they have their own target…

HAVE A BIT OF THAT…
Remember last week – so very long ago – when Manchester United were going to sign both Kai Havertz and Jadon Sancho (which prompted all kinds of nonsense)? Well they still want to sign him apparently. Of course they do, he has scored 11 Bundesliga goals this season and is still only 20.

Man Utd are making efforts to sign Kai Havertz, but a familiar story could develop here… Mr Abramovich has dusted down his wallet and wants to bring him to Chelsea alongside Timo Werner.

But here come Chelsea, with the Daily Mail splashing big on the Blues’ £75m interest in the Bayer Leverkusen man, who already plays alongside their likely new signing Timo Werner for Germany. They claim that losing Pedro and Willian this summer means that they are looking for wide players (even though Havertz has played more through the middle this season), though it’s easy to forget that they have already signed Hakim Ziyech and Christian Pulisic and Callum Hudson-Odoi will soon return from injury.

UNITED IN POLE FOR VIOLA WINGER
Almost for every whisper about Manchester United signing Jadon Sancho there seems to be another about Manchester United lining up an alternative to Jadon Sancho. On Monday, it was claimed the Red Devils had been custard-pied by Barcelona over a massive bid for Ansu Fati. Now, it is claimed they are ‘active’ in the pursuit of Federico Chiesa.

The Fiorentina winger has caught the eye of clubs across Europe, including the big hitters in Italy. But Juventus and Inter Milan are said to be unwilling to do business without being able to throw in a player or two in part-exchange, whereas Fiorentina want just cold, hard cash. Specifically, more than £60million.

That, according to Gazzetta dello Sport, puts United in the frame, though Chiesa is said to be perfectly content to stay in Italy and Fiorentina don’t have to sell.

A subsequent report, however, from Quotidiano Sportivo in La Nazione (brought to our attention by our friends at Sport Witness) suggests Fiorentina could be tempted by an offer just north of £50million should the 22-year-old make clear his desire to move on.

Apparently, Ed Woodward has already accepted that he won’t be able to chuck in Phil Jones and Jesse Lingard as part of the deal and United have stated their willingness to cough up the cash.

PSG HAGGLE OVER SMS
One player United never got around to signing is Sergej Milinkovic-Savic. The Serbia midfielder has been linked with a move to Old Trafford ever since Paul Pogba started being a problem a couple of years ago, but Pogba remains at Old Trafford and Milinkovic-Savic is still at Lazio. For now…

At least until PSG get their way. Apparently, the Parisians don’t have enough central midfielders so they want Milinkovic-Savic in a deal that Le 10 Sport reckons could cost them £71million.

The two clubs are said to be haggling over the final fee, with PSG’s initial £52million offer rejected by Lazio. But it is claimed that an agreement has been reached between PSG and the player, who will receive a salary of around £120,000 a week.