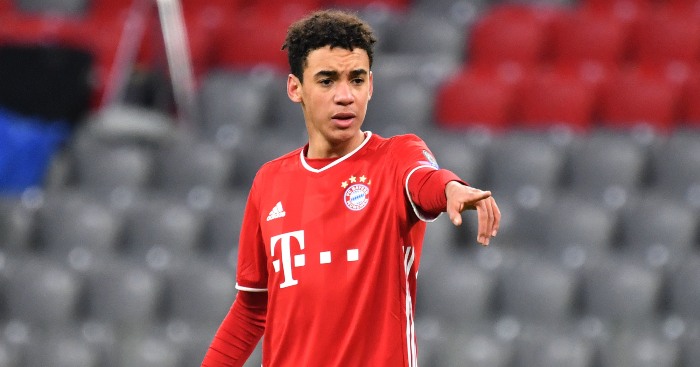 EVERYBODY’S TALKING ‘BOUT JAMAL
Liverpool, Manchester City and Manchester United are all interested in England Under-21 international Jamal Musiala, according to the Daily Mail. And it’s little wonder; he is just 17 but starting in central midfield for actual Bayern Munich. Jurgen Klopp in particular is said to be a ‘big admirer’ of the Stuttgart-born teenager who was prised away from Chelsea for a small fee last July.

Now Bayern are fearful of the same thing happening again – his contract expires in 2022 – so they are ready to give Musiala a new contract worth over £100,000 a week, while simultaneously convincing him that no other cub would be giving him Champions League starts at his tender age.

WHAT’S UP WITH DAYOT?

The RB Leipzig player prefers the Premier League.
No deal in the next transfer-window.
Next summer the ball will start rolling for the defender

Both Manchester United and Arsenal in for him

Hmmm. We are incredibly cynical about this particular claim as Bonucci fared pretty badly when he hopped on a train to Milan for a season so we really cannot imagine that the 31-year-old Juventus captain would be interested in moving to Manchester.

NO HAKAN CHANCE FOR MAN UNITED
Manchester United have been strongly linked with AC Milan midfielder Hakan Calhanoglu but now Calcio Mercato claim that the Turkish international will be staying in Italy and talks of a contract renewal are due to begin.

United are not the only team left disappointed as Napoli, Inter, Juventus and Atletico Madrid had all registered an interest in taking him for a small fee in January or nothing at all next summer. After Christian Eriksen’s snub, that’s another blow.

AND THE REST
West Ham will not sell Issa Diop…Liverpool are planning a new contract for Virgil van Dijk…Aston Villa will turn their attention toward re-signing Douglas Luiz and Ezri Konsa…Lucas Torreira’s agent has denied reports that he could return to Arsenal in January.