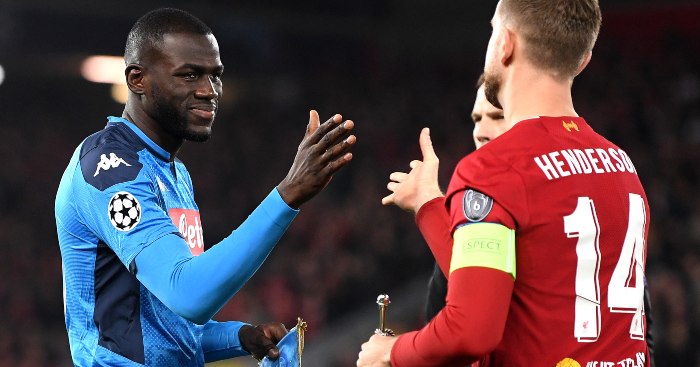 Spurs could trade their record signing for a Bayern midfielder or Barca playmaker. While Koulibaly is said to be Manchester bound…

KOULIBALY HOT ON CITY
Kalidou Koulibaly to Manchester City just makes sense, doesn’t it? Pep Guardiola desperately needs a top-class centre-back having done so for at least a year, while City remain one of the few clubs that can still afford what it would cost to prise Koulibaly from Napoli.

The Senegal defender seems to agree because Duncan Castles reckons it’s Koulibaly’s belief that he is City bound this summer. On the Transfer Window Podcast, Castles relayed whispers from ‘people close to Koulibaly’ that ’there’s a strong chance he will end up at City’.

Liverpool are thought to have shied away because of the cost, with Napoli previously valuing Koulibaly at close to £100million, and though Covid has pushed the price down, it hasn’t been halved, as some have suggested. Around £72million is the magic number, apparently.

PREM TRIO TARGET BRAZIL DEFENDER
Thiago Silva, on the other hand, won’t cost a dime. Not in transfer fees at least…

Like Koulibaly, it is said the Brazil defender’s priority is to secure himself a move to the Premier League, and as you might expect, there are plenty of interested parties in the 35-year-old who is walking away from PSG after eight years in France.

Goal in Portugal names Everton, Tottenham and Wolves among Thiago Silva’s suitors, all of which are plausible links.

NDOMBELE NDONE WITH JOSE
Should Spurs sign Thiago Silva, the defender could pass Tanguy Ndombele heading in the opposite direction to Paris.

That’s because Ndombele is reported to have told Jose Mourinho that he won’t play for the Tottenham manager again. According to ESPN, Ndombele, Spurs’ record signing following a £58million move from Lyon last year, is said to have snapped in the face of Mourinho’s persistent criticism and in a training ground row on Monday, the midfielder said he’d had enough.

Bad news for Spurs perhaps but great news for Pini Zahavi who may get to arrange another big-money move for Ndombele. PSG are said to be an option, particularly if a loan can be arranged, while Bayern Munich are also reported to be keen, especially if they can throw Corentin Tolisso in with the deal.

Barca may also get involved if they can palm Philippe Coutinho off on Spurs while taking Ndombele to the Nou Camp.

AND THE REST
Juventus have enquired about Arsenal striker Pierre-Emerick Aubameyang… Man Utd are the only summer option for Jadon Sancho but Borussia Dortmund won’t take anything less than £118m… Arsenal are chasing Sporting Lisbon wonderkid Joelson Fernandes but the 17-year-old attacker is also a target for Barcelona and RB Leipzig.