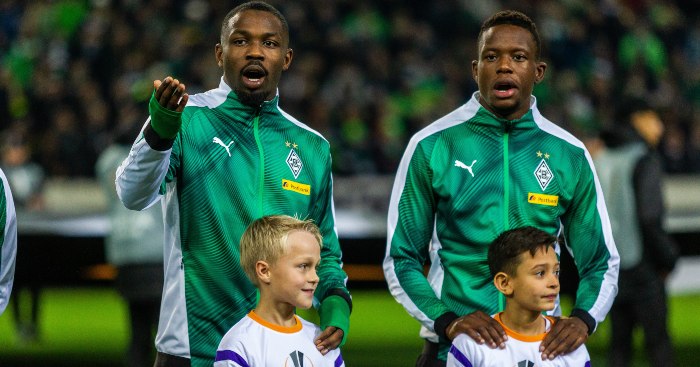 LIVERPOOL TARGET ‘GLADBACH DUO
Liverpool say they will find a different way of paying their staff other from a government scheme that was never intended for a football club which made a huge profit last year. The Daily Express is quoting a report from German outlet Express which suggests they might also come up with £88million to throw at Borussia Monchengladbach this summer too.

For that princely sum, Liverpool are apparently hoping to get their hands on Denis Zakaria and Marcus Thuram. Both have shone in ‘Gladbach’s impressive season and the pair are widely expected to be on the move whenever the transfer window is open.

Defensive midfielder Zakaria has been linked with Manchester United and Arsenal, while Thuram only joined Gladbach last summer for around £9million from Guingamp. Lillian’s lad has scored 10 goals in 33 appearances since and is represented by Mino Raiola.

REDS, UNITED AND CITY IN QUEUE FOR TORRES
Liverpool are also said to be interested in Ferran Torres. Indeed, recent reports suggested the Reds had already held talks with Valencia over the winger. But they are certainly not alone in their pursuit.

Goal says Manchester United and Manchester City are also in the hunt for Torres, as well seemingly every other big hitter in Europe. Barcelona, Real Madrid, Atletico, Bayern Munich, Juventus, Borussia Dortmund and Ajax are all listed in the latest report, which could spark a very convenient bidding war.

Valencia need to fill a £36million hole in their budget this summer, which Torres could do on his own if there really are 10 European giants on his tail. The 20-year-old has a buy-out clause in his contract worth £88million but since he has only a year remaining on those terms, Los Che will be happy just to pay their debts.

ARSENAL EYE ANOTHER UNAI
Arsenal could also be shopping in La Liga this summer. Reports in Spain claim the Gunners have eyes on Atheltic Bilbao defender Unai Nunez.

The 23-year-old was a target for West Ham in January but Nunez stayed put before changing his agent with a view to a big move this summer. La Razon claims Mikel Arteta is ready to make it happen for the Spain international.

Nunez is under contract for three more years but those terms are reported to contain a buy-out clause worth around £26million.

AND THE REST
Man Utd are increasingly confident of signing Jadon Sancho…Barcelona face competition from Real Madrid and Man City for Lautaro Martinez…Wolves want £70m for Adama Troare…Jesse Lingard has no intention of leaving Man Utd despite being linked with Arsenal and Everton…Chelsea and Arsenal are both in the race to sign Jerome Boateng from Bayern Munich.