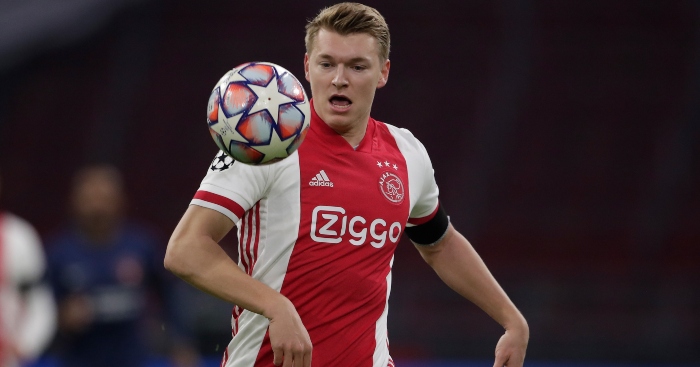 LIVERPOOL’S SCHUURS LINK PLAYED DOWN
Perr Schuurs is one of the 427 centre-backs to have been linked with Liverpool since Virgil van Dijk was ruled out long-term. But it seems there is little prospect of the Reds moving for the Ajax defender in January.

That’s the feeling in Amsterdam at least. A report in Corriere dello Sport suggested that Ajax could be tempted by an offer for Schurrs of between £25million and £30million and while that may be the case, it doesn’t appear to coming from Merseyside in the near future.

De Telegraf says Liverpool were impressed by the Ajax defender when the two clubs met in the Champions League – which they will do again this week – and Schuurs is ‘on a list’. But ‘there are 50 players on it’.

The same report also suggests that Nico Tagliafico is going nowhere in January too. He will eventually leave for around £20million but not before the Man City-linked left-back signs extended terms at Ajax.

ARSENAL ‘TO BID FOR RB LEIPZIG DEFENDER’
Arsenal too are being linked with centre-backs despite having loads of them already on their books.

This morning, it is claimed that a bid will be submitted to RB Leipzig for a defender not named Dayot Upamecano. According to Todofichajes, the France star is too mainstream for Mikel Arteta, who has his eye on Ibrahima Konate instead.

Leipzig are said to be open to an offer for the 21-year-old but they would prefer to wait until the end of the season before selling the former Sochaux defender they signed for free in 2017.

INTER EYE WOLVES STAR
Raul Jimenez is waking up this morning in a north London hospital after a sickening clash of heads with David Luiz during Wolves’ win at Arsenal.

Inter Milan may well be keeping an eye on the centre-forward’s condition since they are said to be interested in bringing Jimenez to Italy at the end of the season.

According to Calciomercato, the Mexico star is on Inter’s list of possible replacements for Lautaro Martinez, who was wanted by Barcelona but looks just as likely to join Manchester City.

Inter are not the only Serie A side interested in Jimenez, Juventus too are said to be sniffing.

JUVE, PSG IN POSSIBLE SWAP DEAL
Juve, though, are also rumoured to be exploring a swap deal with PSG…

Calciomercato suggests an exchange involving Paulo Dybala and Mauro Icardi is being explored. Juve are struggling to get Dybala to commit to a new deal and they have been keen on Icardi since before the striker was sent to PSG by Inter.