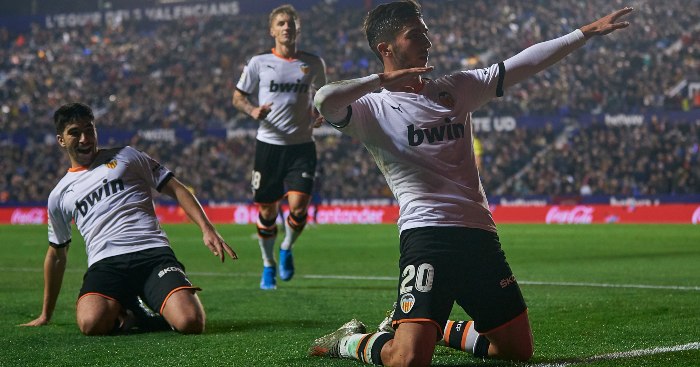 LIVERPOOL TALKING OVER TORRES
There seems to be a queue forming for Ferran Torres akin to that in Tesco for the last bog rolls. Barcelona and Real Madrid are said to be jostling for position but reports suggest Liverpool have put themselves at the front with their cash in hand…

The 20-year-old winger was enjoying a breakout season before it all came crashing to a halt in recent weeks. But Sport1 says the Reds have seen enough to open talks with Valencia over a summer deal.

There are some doubts over the amount it might take to buy Torres out of his current contract, with one report claiming it could be as high as £80million.

But Valencia are said to be willing to take around a third of that, with £27million likely to be enough to prise the Spain Under-21 international away from the Mestalla.

ARSENAL EYE VALENCIA MIDFIELDER
Arsenal are also sniffing around Valencia but the Gunners have eyes on a different target.

Sky Sports says Mikel Arteta wants to capitalise on Valencia’s need to balance the books by bringing Carlos Soler to the Emirates this summer.

Apparently, Los Che need to raise around £36million before July and Arsenal could clear the bulk of that debt by signing the 23-year-old for £30million.

BAYERN TO SIGN BARCA KEEPER FOR RECORD FEE – OR NOTHING
Saturday morning’s whispers add some extra layers to Friday’s Gossip surrounding Manuel Neuer. In case you missed it, Chelsea are supposedly interested in the Bayern Munich keeper.

Neuer is out of contract next year and though Bayern have already taken steps to replace the 34-year-old by signing Alexander Nubel from Schalke, reports in Spain suggest they want to go even further.

Marc-Andre ter Stegen is having a similar contract dispute wit Barcelona and it seems a deal is way off, especially while Barca are struggling to pay their players as it is through the coronavirus crisis. Diario Sport say Bayern could make Ter Stegen the world’s most expensive goalkeeper this summer by signing Neuer’s great rival for the Germany shirt for a fee of around £80million.

Sport, though, reckon Bayern are being a bit more savvy. Apparently, the Bundesliga leaders are urging Ter Stegen to run down his contract whch expires in two years. Then they’ll scoop him up as a free agent, though Barca would be aghast to lose the former Borussia Monchengladbach stopper for nothing.

AND THE REST
Everton and West Ham are both keen on Barcelona striker Martin Braithwaite who could be available for £16m… Barca will allow Arturo Vidal to join Inter this summer… Inter won’t accept Vidal in part-exchange for Lautaro Martinez.