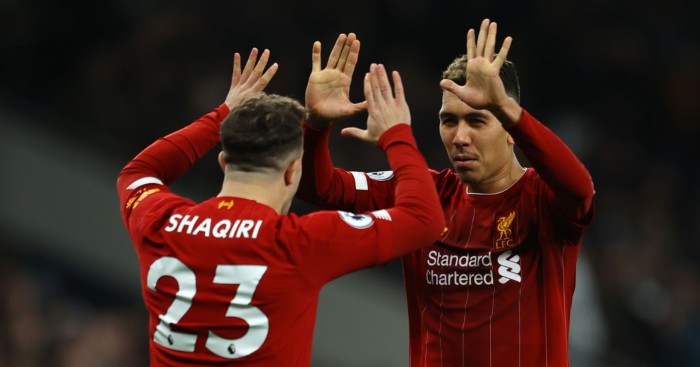 FOR ME? NO
The gossip column cannot possibly stress enough how much salt is required to accompany any Liverpool transfer story The Sun publishes. It was b*llocks when they suggested Virgil van Dijk might be tempted by Juventus; it is even more ridiculous to suggest Roberto Firmino will be popping off anywhere.

Yet here we are, with an exclusive that Bayern Munich ‘are looking to refresh their squad’, with the Brazilian and Leroy Sane in their sights. Firmino is seen as ‘the ideal player’ to help gradually phase out Robert Lewandowski, who is four years older and still prolific.

The silliest part is that Bayern reckon they can get Firmino as Liverpool ‘are preparing themselves’ to sell one of their fearsome front three to make room for Timo Werner…who we’re pretty sure is a Bayern target.

And if any of Firmino, Sadio Mane or Mo Salah are sold to sign Werner – which in itself seems unlikely – then the Brazilian would surely not be the first to go. He is the single most important player in Liverpool’s entire system, has made more appearances under Jurgen Klopp than any teammate and has more than three years left on his contract.

The Sun do try and cover themselves by stating that Liverpool have been ‘speaking to every individual player and their agent to find out what their plans are for next season’. And while most will stay, some ‘could seek a move for more regular football’.

How does that possibly apply to Firmino? And as for an offer that ‘could be as high as £75million’…

ECHO CHAMBER
Expect the Liverpool Echo to be along shortly with official word from the club rubbishing that rumour. For now, an article predicting a further £75m of sales will do.

With Adam Lallana and Nathaniel Clyne departing when their contracts expire this summer, one might assume there will be no further outgoings at Anfield. One would seemingly be wrong.

Dejan Lovren is first: he ‘might be the highest profile star to seek an exit this summer’, having done precisely that last year. He since fought his way back into the first team but remains an undeniable fourth-choice centre-half. The Croatian Ragnar Klavan could be allowed to go for £10m.

Next is Xherdan Shaqiri, who Klopp persuaded to stay in January. Liverpool will be ‘open’ to selling him for £25m when he is adorned with a Premier League winner’s medal.

Then there’s Harry Wilson, whose Bournemouth loan has taken his valuation to ‘upwards of £20m’. Football Insider said over the weekend he’d be sold due to the emergence of the youth team. While Marko Grujic might earn a chance to prove himself on Merseyside but could be sold for a similar amount if, say, Curtis Jones keeps being mint, having impressed at Hertha Berlin.

LOVE HAVERTZ
What will Liverpool do with this £150m they definitely aren’t getting? Well, Kai Havertz won’t pay for himself.

The Daily Express say Klopp has made the Leverkusen star his ‘top midfield target’, with the Reds ‘desperate’ to bring him in.

He will not come cheap. It will take ‘close to a club record’ bid to prise him from Germany. And the world, European and future English champions – who spent barely any money last summer and relatively little in January – could not possibly afford that without a few sales.

AND THE REST
Ajax and Cameroon goalkeeper Andre Onana, 23, is set to choose Chelsea in a £34m deal this summer, despite being linked with Barcelona and Paris St-Germain… The release clause of Napoli’s 28-year-old Senegal defender Kalidou Koulibaly, who has been linked with Manchester United, will be active from June – but it is £127m… Celtic are lining up a summer deal for Cardiff City’s English winger Josh Murphy after missing out on the 24-year-old on transfer deadline day… Tottenham Hotspur manager Jose Mourinho was spotted wearing a baseball cap and sitting alone in the directors’ box to watch Champions League opponents RB Leipzig at Bayern Munich.