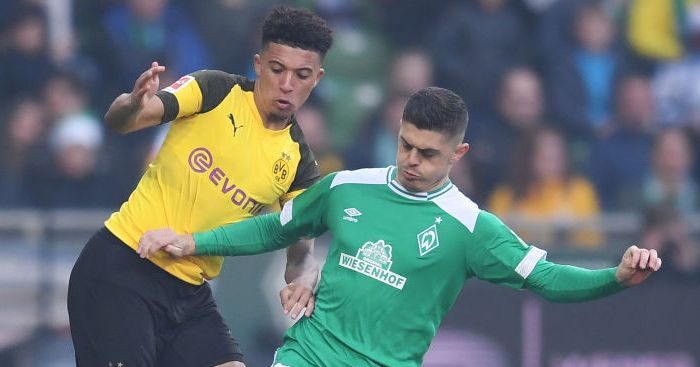 Liverpool have been watching a Bundesliga ‘sensation’ that isn’t Sancho. Arsenal are keeping tabs on Germany, too.

SANCH DRESSING
It seems a shame that the blossoming relationship between Jadon Sancho and Erling Haaland will be broken up this summer. But while the latter has just started his Borussia Dortmund career in emphatic fashion, the former’s time in Germany is coming to an end.

The only thing left to decide is where Sancho ends up. And Kaveh Solhekol of Sky Sports has the answer.

“If I was a betting man my money would be on Liverpool,” he said on Wednesday afternoon. While “Manchester United are confident” of a deal, that would rely on Champions League qualification and, most pertinently, they lack “the Klopp factor”.

Sancho’s fee is pretty much the one aspect of his future that can be unanimously agreed upon. It will cost £120m to prise him from Dortmund; that still doesn’t feel like Liverpool’s style.

RASH DECISION
But Klopp’s quest to enhance his attacking options by rummaging through the Bundesliga’s drawers will continue apace, according to Bild. They say Milot Rashica’s Werder Bremen performances ‘have caused a sensation’ and he has been ‘repeatedly observed’ by the European champions.

Bild describe Rashica’s departure as ‘inevitable’, with Werder second from bottom in Germany’s top flight. But they cast doubt on whether he would join Liverpool as he would not be a regular starter.

They do, however, point out that Werder need the money, and the reported release clause of £31.8m is relatively low for a 23-year-old with seven goals and three assists in 18 league games for a side battling relegation.

Dortmund would also be interested, with Bayern lurking but presumably waiting after he impresses for a couple of years at the Westfalenstadion to swoop. Liverpool will keep track of his progress in the meantime.

TAH, MATE
And we finish at SportBild, who report a change in Jonathan Tah’s contract that will make him available for around £33.5m.

That price would increase if Bayer Leverkusen qualify for the Champions League, and the clause itself expires before Euro 2020. So it would offer the smallest of windows for any interested club to sign one of the Bundesliga’s best centre-halves on the cheap.

Arsenal ‘are already serious’ about reuniting Tah with goalkeeper Bernd Leno. It seems unlikely, what with William Saliba’s impending arrival for a fair amount. Those despicable sods over at Atletico Madrid are also interested. And fifth-placed Bayer could even keep him, provided they qualify for the Champions League.

You would think Arsenal are ruled out on that basis.