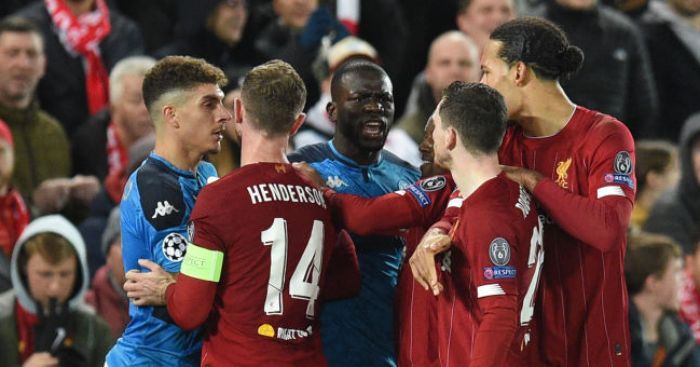 KALIDOU DO YOU THINK YOU ARE?
Jurgen Klopp once described his signing as “incredible”, but it seems that he could be about to sell Joel Matip. Liverpool have to make way for Kalidou Koulibaly, after all.

‘The first contacts have already been made,’ if TuttoMercatoWeb are to be believed. And they probably aren’t. But they do say Napoli have decided to sell their ‘jewel’ due to financial pressures posed by the global pandemic.

They are currently sixth in Serie A and face the prospect of losing all that sweet Champions League money next season, with no viable argument as to why they should qualify ahead of Atalanta or Lazio. Koulibaly is one of their most valuable assets, with a slew of teams interested, so could be sacrificed.

Klopp wants to form ‘an explosive couple’ at the heart of his Liverpool defence, which is where Matip comes in. He would either be sold or ‘downgraded to the very first reserve,’ with the first option suggested as ‘more likely’.

Matip is 28 and has more than four years on his Liverpool contract. That would not be a low fee. Napoli have reportedly dropped Koulibaly’s price to £70m. Are we still to pretend such deals will be commonplace this summer?

JACK IT IN
One club that does not want Koulibaly is Manchester United. That has already been made clear. But it seems as though they have their transfer priorities in order.

With Leicester ‘confident’ that no-one can afford James Maddison in the current climate, he ‘expects to stay’ at least until next season. The Manchester Evening News therefore say Jack Grealish is United’s primary target for that creative midfield role.

Maddison would cost around £80m and Grealish, perhaps depending upon Aston Villa’s Premier League fate, could be a fair bit cheaper. No fee is mentioned – £60m seems to be the accepted price – but they absolutely will not be signing both.

TOSSED SALADS AND SCRAMBLED EGGS
That £15m bid United made in January to sign Ryan Fraser will be the final chance Bournemouth had of securing any money for the winger. His contract expires in the summer and many a team has had their interest piqued.

Among them is Tottenham, who Football Insider say are now leading this particular race. Fraser ‘is eager to join a Champions League calibre club and Spurs would interest him’. Are those two points related?

The Scotland international ‘has told friends’ that Tottenham would be a tempting proposition if the move was to materialise. Jose Mourinho would bloody love him.

AND THE REST
Real Madrid and Barcelona have joined the race to sign Borussia Dortmund and England winger Jadon Sancho. Manchester United are also keen on the 20-year-old… Arsenal face competition from AC Milan to sign Real Betis and France midfielder Nabil Fekir, 26… Bayern Munich are only willing to pay £60m for Manchester City and Germany winger Leroy Sane, 24… Barcelona will not sell Brazil winger Philippe Coutinho for less than 100m euros (£87m). Chelsea have been linked with the 27-year-old… Inter Milan are keen to make Victor Moses’ loan deal permanent but want Chelsea to drop their 12m euros (£10m) asking price for the 29-year Nigeria winger… Manchester United will reject any bids for English goalkeeper Dean Henderson during the next transfer window. The 23-year-old is currently on loan at Sheffield United.