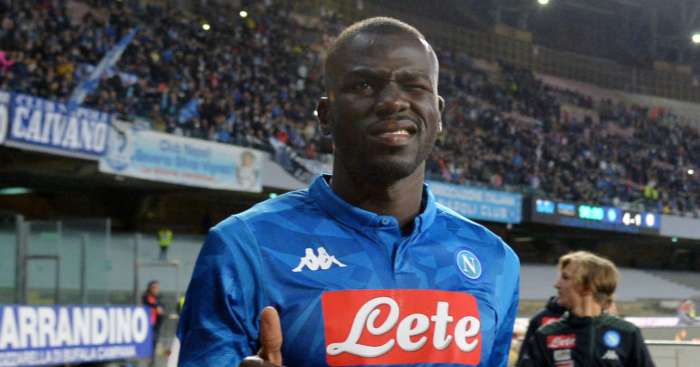 LIVERPOOL READY TO COUGH UP FOR KOULIBALY

Kalidou Koulibaly was perhaps the only centre-back in Europe not to be linked with Liverpool on Wednesday morning. But that mishap has been corrected quite spectacularly…

With Virgil van Dijk out long-term – perhaps for longer than initially thought – Liverpool need cover, even if Jurgen Klopp isn’t keen to admit it. They were linked with Koulibaly in the summer, as were Manchester United and Manchester City, but no one was prepared to make Napoli an offer they couldn’t refuse.

“I have sensational news about Kalidou Koulibaly,” he told Italian TV station 7 Gold. “Manchester City and United are in for the Senegalese defender as well as PSG.

“The club that is most serious about the Senegalese is Liverpool. The Reds have offered a figure between €70m-€75m (£62.6m-£66.6m), the sum that Aurelio De Laurentiis wants.”

Mind you, they did pretty well without him on Wednesday night.

Liverpool have been watching White for a year or so now, and they were linked with a move last summer. Leeds seemed to be most keen to sign the defender they had on loan last season, but Brighton reportedly turned down three bids, the last of which was reportedly worth £25million.

That will be because, according to The Sun, the Seagulls are demanding in excess of £50million for the 23-year-old. That equates to £10million per Premier League appearance so far. Liverpool reportedly have reservations over White’s height anyway.

If Liverpool want a centre-half, Sergio Ramos could be available…

The Real Madrid defender could be a free agent next summer and Fabrizio Romano reckons big clubs are hovering.

Apparently, Juventus and PSG are keen on Ramos, though the player is said to be willing to remain where he is.

SPURS TO OFFER ROSE PAY OFF

Tottenham want rid of Danny Rose – and they’re ready to pay him to go.

Rose was omitted from Spurs’ Premier League squad and he looks set to kick his heels perhaps until his contract ends next summer. Or he can play in this XI of discarded players.

But Football Insider says Spurs are set to offer Rose an early settlement for him to sling his hook.

Rose is currently earning over £70,000 a week but Spurs want to offer him £2.5million now to get him from under their feet.