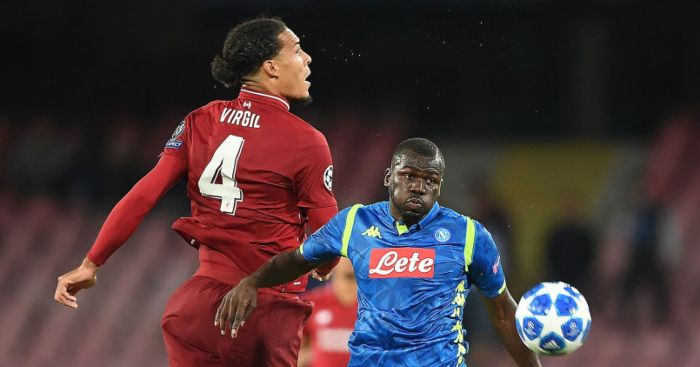 LIVERPOOL LOW-BALL FOR KOULIBALY
The dream of pairing Virgil van Dijk with Kalidou Koulibaly is already a recurring theme of the summer, despite Jurgen Klopp’s insistence that the Reds will not be spending big this summer. According to Corriere dello Sport, who might just be using the Reds to drive up the centre-half’s price, Liverpool have offered £54m for the Senegal international.

The problem with Liverpool offering £54m is that Napoli want £90m; they will hope to get a number closer to that figure from Manchester United or PSG. Other reports on Sunday suggested that Liverpool were ‘above all’ in the race.

CITY TARGET RUBEN DIAS
Manchester City will target a centre-half this summer, according to the Evening Standard, with Benfica’s Ruben Dias the name mentioned in a report that leads on the club’s reluctance to spend serious money on a replacement for Leroy Sane even though they will lose both him and David Silva.

City started Eric Garcia alongside Aymeric Laporte against Arsenal last week, with Fernandinho and Nicolas Otamendi on the bench. John Stones did not even make City’s 20-man squad and is expected to exit this summer, with Arsenal and Newcastle previously mentioned as possible destinations.

AND THE REST
Roma have offered Tottenham’s Belgium defender Jan Vertonghen a two-year deal…Chelsea could turn their attentions to Paris St-Germain’s France left-back Layvin Kurzawa if Ben Chilwell is too expensive…Everton have joined the race to sign Real Valladolid defender Mohammed Salisu…Daniele Rugani and Federico Bernardeschi could be offered to Wolves in part-exchange for Raul Jimenez.