Liverpool, Man Utd and Arsenal have been linked with a Barca star, while Paul Pogba to Juve speculation continues... 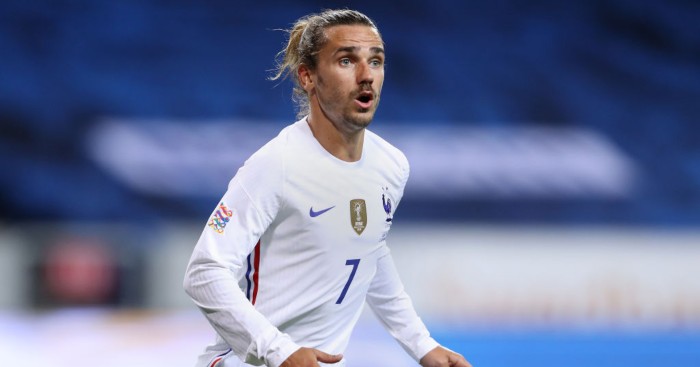 Liverpool, Man Utd and Arsenal have been linked with a Barcelona star, while Paul Pogba to Juve speculation continues…

BARCA CASUALTY?
The Daily Mail claims that Antoine Griezmann’s future at Barcelona is now ‘in doubt’ after Lionel Messi’s ‘stunning U-turn’. Premier League clubs ‘are on fresh alert’ with Messi’s decision to stay at the Camp Nou having ‘major repercussions’ for the rest of the Barca squad.

Griezmann was ‘promised the Messi role by new Barca boss Ronald Koeman’ but ‘those plans are in tatters following Messi’s announcement on Friday’. Messi said he had been telling Josep Maria Bartomeu “all year” that he wanted to leave Barcelona but he could never go to court against the club to secure a move. And the report in the Daily Mail adds that Koeman now needs ‘to trim his squad to cater for Messi and allow young talents like 17-year-old Ansu Fati and winger Ousmane Dembele to shine’.

The report describes Griezmann as ‘particularly vulnerable’ having only provided nine goals and four assists in 35 LaLiga matches last term following his £107m move from Atletico Madrid. That compares badly to his 15 goals and nine assists the previous season for Atletico. Liverpool, Man Utd and Arsenal are all named as possible destinations with Jurgen Klopp’s ‘pressing style’ suited to his game. United and the Gunners are ‘admirers’ but there is an admission that Barcelona ‘would have to agree a major loss on their investment to make any deal happen’.

POGBA WAITING FOR JUVENTUS
Man Utd midfielder Paul Pogba is ‘waiting for Juventus’ to make a move for him, according to reports in Italy.

The World Cup winner endured a difficult 2019-20 campaign due to injury, but he ended the season strongly as he helped Ole Gunnar Solskjaer’s side to a third-placed finish in the Premier League. Pogba, whose current deal runs until next summer, revealed in July his desire to win more trophies at Old Trafford. And his agent Mino Raiola has said recently that Man Utd will not accept any bids for the player this summer.

However, Italian outlet Tuttosport claims that Pogba is being ‘held captive by a contract worth around € 13.5 million per season’ at Man Utd and that it is ‘his desire to return to Juventus’. The Red Devils have ‘continued to ask for unattainable figures’ for Pogba while the Frenchman’s wages are ‘inconsistent with the plan’ that Juventus are ‘implementing’.

The report adds that Raiola ‘knows very well that his client would like a change of scenery and that without the renewal it becomes much easier to fulfill his wish’. Juventus are hopeful that Pogba doesn’t renew with his value set to ‘drop drastically’ at the end of 2020/21.

AND THE REST…
Real Madrid are still refusing to rule out the prospect of Gareth Bale leaving the club this summer…Newcastle have made a bid of £20m for Bournemouth striker Callum Wilson…Sheffield United are favourites to sign Bayern Munich forward Leon Dajaku…Tottenham are preparing a £13m bid for Watford midfielder Will Hughes…Chelsea are set to hand Michy Batshuayi a new deal before offering him out on loan…Barcelona midfielder Rafinha is a transfer target for Leeds United.