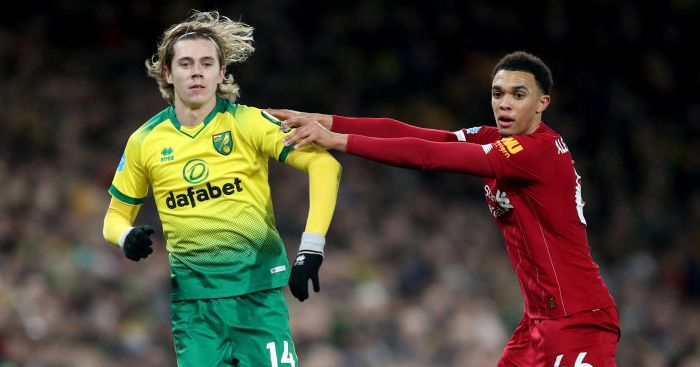 CANARY DOWN THE GOLD MINE
After successfully plundering relegated Premier League clubs for Danny Ings (2015/16), Georginio Wijnaldum (2016/17), Andy Robertson (2017/18) and Xherdan Shaqiri (2018/19), attention will soon turn to which Championship-bound star Liverpool will target this summer.

If reports are to be believed, Todd Cantwell is the most likely candidate. And reports from David Ornstein of The Athletic are pretty much always to be believed.

He claims Liverpool ‘have intensified their interest’ in the Norwich midfielder, and ‘can now be considered front-runners’ ahead of Manchester City, Tottenham and Manchester United, whose own plans were revealed on Sunday.

Cantwell ‘impressed members of the playing and coaching staff’ during Norwich’s narrow defeat to Liverpool at the weekend, with the Canaries ‘likely’ to demand £30million or so for the 21-year-old.

BLIND LEADING THE BLIND
Ornstein also has some news from Ajax, with up to eight more players expected to follow Hakim Ziyech in leaving Amsterdam this summer.

Perhaps of the most intrigue is Daley Blind, who ‘is among the left-sided centre-back options being considered by teams in England’. Arsenal are named and, appropriately, ‘his contract is understood to include a low buyout clause’.

CITY BREAKS
The latest on Manchester City comes from the Daily Telegraph, who say the reigning champions ‘accept that some players will want to leave at the end of the season if the Champions League ban is upheld’.

It is suggested that Pep Guardiola ‘is now leaning towards staying at the club’, with the manager referred to by a source as “calm”, “pragmatic” and “not the kind of person whose first thought is to leave when things turn bad”.

As for the players, City ‘will be concerned’ about the futures of Kevin De Bruyne, Raheem Sterling, Aymeric Laporte and Bernardo Silva in particular. But the club has informed everyone that ‘they fully expect this to be dealt with by the end of May so futures can be planned’.

Is that before or after they’re stripped of their 2014 title?

AND THE REST
Pep Guardiola will remain as Manchester City manager even if the club fail to overturn their two-year ban from the Champions League… Barcelona would have to include France striker Antoine Griezmann in any deal to tempt Inter Milan to sell Lautaro Martinez to them. The Argentina international, 22, has a reported release clause of £92m… Inter Milan are in talks to sign Manchester United’s 20-year-old Netherlands Under-21 winger Tahith Chong, who is out of contract at Old Trafford this summer… Manchester City’s 23-year-old English winger Jack Harrison is keen to make his loan move to Leeds United, who are chasing promotion to the Premier League, permanent.