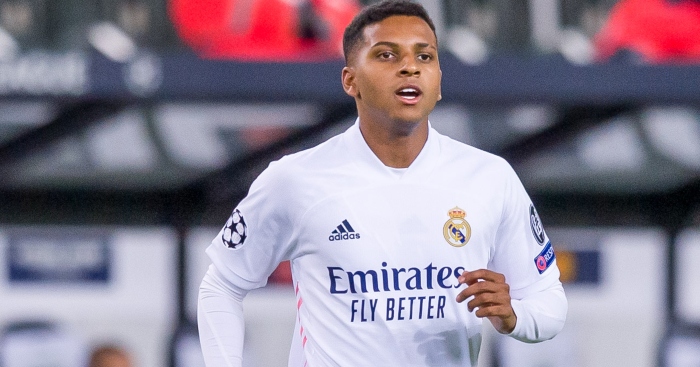 Liverpool’s scout in Spain has been a busy boy, apparently…

The Reds had already identified Real Betis defender Aissa Mandi as a potential target, with reports suggesting a £9million bid was rejected during the summer.

But Fichajes reckons Liverpool aren’t done yet with the 29-year-old, especially in the wake of Virgil van Dijk’s injury.

Mandi is out of contract in 2022 which could make Betis more open to a cheaper sale, with the versatile Algeria defender representing a cheap, short-term option.

You couldn’t say the same for Rodrygo…

The Real Madrid youngster is said to be valued at around £62million but Don Balon says that hasn’t deterred Jurgen Klopp.

The Brazilian forward has one goal and three assists in eight Real appearances this season, though only two of those have come as a starter.

Still, Zinedine Zidane is said to be ‘extremely opposed’ to selling the 20-year-old who Liverpool supposedly see as a long-term replacement for Mo Salah.

Inter Milan are continuing in their attempt to hoover up the Premier League’s best ageing talent by maintaining their pursuit of N’Golo Kante.

It was Antonio Conte who took Kante to Chelsea in 2016 and the Inter boss wants a reunion with the France midfielder next summer.

Canal says Inter made attempts to sign Kante last summer and the Italians will be back next year, by which time the former Leicester title winner will be 30.

While they are there, Inter are also keen to take Olivier Giroud, Marcos Alonso and Emerson too.

Inter have also been linked with Marcelo and Sergio Aguero.

Marcelo is up for grabs as he approaches the final year of his contract at Real Madrid, who could be open to selling the left-back for around £11million in January, according to to Todofichajes.

Aguero is even closer to becoming a free agent with the Manchester City striker available for free at the end of the current season. Inter are said to be rivalling Independiente for the Argentina striker, but Calciomercato suggests a move to Italy is the more unlikely of the two options.