Liverpool could sell up to eight players, but Oxlade-Chamberlain won't be one of them. And Alli is 'upset'. 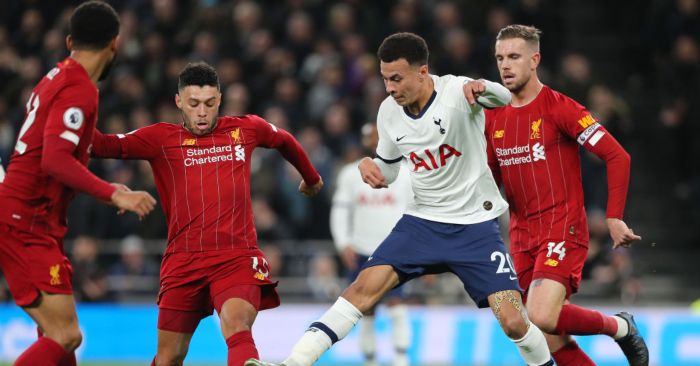 Liverpool could sell up to eight players, but Alex Oxlade-Chamberlain won’t be one of them. And Dele Alli is ‘upset’ at Spurs.

CHANGE THE OX
It was a matter of hours after the claim that Wolves might sign Alex Oxlade-Chamberlain before the rumour was quashed. Liverpool certainly move fast and with authority in the transfer window. And against Chelsea.

The Daily Mirror say that the Reds ‘have no intention’ of letting the England international go, despite they themselves reporting the initial story. You could have just waited, guys.

Oxlade-Chamberlain is said to be ‘very happy’ at Liverpool, which must come as a surprise to anyone expecting a player with 43 appearances for the Premier League champions last season to be hankering to leave.

They will ‘rebuff any approach’ for a player whose goals from midfield make him crucial, different, “not the worst footballer” and ‘not for sale’. And that’s the bottom line, ‘cos James Pearce says so.

I’m told there is zero chance of Liverpool selling Alex Oxlade-Chamberlain before the transfer deadline. He remains a key part of Klopp’s plans for the season ahead. #LFC

MAKE A BREW
Liverpool are not withdrawing from the seller’s market entirely. They have some signings to offset and the means with which to do so.

Rhian Brewster is perhaps their most saleable and expendable asset, attracting interest throughout the Premier League. The Daily Mail believe Crystal Palace to be the ‘favourites’ in that particular race, ahead of Sheffield United and West Brom.

Liverpool will happily negotiate with anyone who gives them £20m, a buy-back option and a sell-on clause. They really aren’t asking for much.

Other players that could leave Anfield in this transfer window include Divock Origi, Marko Grujic, Harry Wilson, Loris Karius, Nat Phillips, Yasser Larouci and Taiwo Awoniyi. Origi is a reported target for Brighton, while Grujic is wanted by Borussia Monchengladbach. As for the rest, who knows?

DELE COUNTER
It must come as a particular relief to every footballer that no matter how bad things seem, how irretrievable their respective scenarios, PSG will come calling if needed. If you have a Wikipedia page, they are perennially ‘interested’.

Dele Alli might seek solace in France after being left ‘upset and confused’ by his omission from the Tottenham squad to face Southampton. The Daily Telegraph suggest a season-long loan to suit all parties. Inter, surprisingly enough, are also sniffing around.

That poor sod Jose Mourinho complained of having “too many players” last week, so it does make sense. Alli, for what it’s worth, is ‘open’ to winning a career’s worth of trophies in a single season while playing alongside Kylian Mbappe and Neymar.