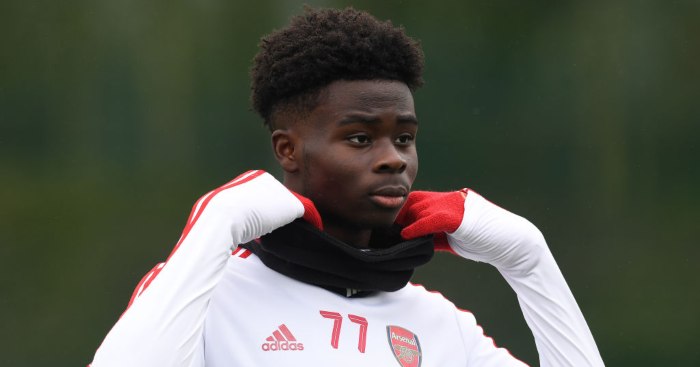 Liverpool have been linked with a Brazilian, while the Reds have been especially impressed by one Arsenal youngster…

KLOPP WANTS ARSENAL YOUTH
Liverpool are eyeing up a shock move for Arsenal youngster Bukayo Saka, according to reports. The 18-year-old has been enjoying a breakthrough year at the Emirates Stadium, making 29 appearances in all competitions this season.

Saka has been covering at left-back in the absence of Sead Kolasinac and Kieran Tierney and has provided nine assists for his team-mates. And now Football Insider (via The Sun) claims that Liverpool boss Jurgen Klopp is keen to bring Saka to Anfield.

Saka is approaching the final year of his contract at Arsenal and the Gunners are keen for him to agree on a new five-year deal at the club. Talks have been ‘on hold’ due to the coronavirus pandemic ‘after an initial offer was made to the teenager earlier this year’. Liverpool have been ‘hugely impressed’ by the England under-19 international.

ANOTHER BRAZILIAN AT ANFIELD?
Liverpool have made an offer for Vasco da Gama forward Talles Magno, according to reports in Spain. Magno first made the Vasco de Gama first team at just 17 and the 19-year-old has netted twice and added an assist in his 17 appearances in the 2019 Campeonato Brasileiro which finished in December.

In addition, Magno – who was linked with Liverpool in February – has bagged three goals in six appearances for the Brazil Under-17s. And Spanish newspaper AS (via the Daily Star) claims that Liverpool have joined the bidding ‘aggressively’ in an attempt to lure Magno to Anfield. Benfica have already made a £2.6m offer to gain priority for the youngster and the Reds are seen as their biggest threat.

Sevilla have also shown interest in Magno, whose release clause is set at £43m – but AS reckon a deal could be done nearer the £21m mark.

SPURS LEADING MAN UTD FOR BELGIAN
Tottenham are ahead of Premier League rivals Manchester United in the race to sign Paris Saint-Germain defender Thomas Meunier, according to reports in France. On Saturday there were claims by ESPN that Spurs boss Jose Mourinho phoned the defender two days ago for ‘a long chat’, with the report suggesting Meunier was ‘flattered’.

Mourinho explained during the call that he is targeting a right-back and has him ‘top of his list’, but that chairman Levy would have to be ‘persuaded’ to sanction the move. Meunier was linked as recently as January with a move to Man Utd as they looked for a replacement for Ashley Young, who left to join Inter Milan in the winter transfer window.

However, Le Parisien now claims that it is Dortmund and ‘especially’ Tottenham who are leading the chase for the PSG man. It is ‘inevitable’ that he will leave Paris this summer with Meunier rejecting an ‘extension proposal’ that has been on the table since autumn 2019.

AND THE REST…
Real Madrid have told Arsenal that they must make a decision on Pierre-Emerick Aubameyang‘s future by June 15…Italy’s 2006 World Cup-winning captain Fabio Cannavaro has said that he hopes to manage in the Premier League one day…Former Tottenham full-back Kieran Trippier will cost Premier League clubs £20million if they want to bring him back to England from Atletico Madrid…Man United have offered a £1,200 per week contract to 16-year-old Sunderland prospect Joe Hugill…Liverpool are prepared to offer a bumper new contract to Sadio Mane that would see the Senegal international end his career at Anfield.