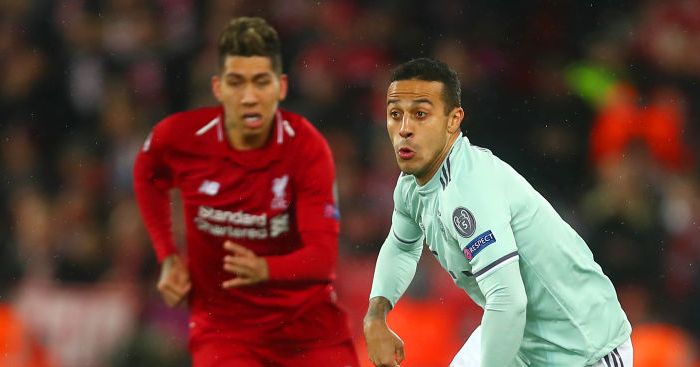 O, THIAGO
So how do Liverpool intend to build on solid title-winning foundations? It’s a curious question, not least because this season has been achieved on the back of a summer with no major first-team signings. They could simply hope lightning strikes twice. Or they could right one of the many managerial wrongs of David Moyes.

Guillem Balague took us on a beautiful journey on Thursday, detailing how Thiago Alcantara ‘could not believe’ how Manchester United rejected him twice in 2013. But the midfielder retains a desire to play in the Premier League and has made a ‘similar’ request to his agent to source an interested club.

He asked his agent (Pep’s brother) to get him a transfer from Barcelona to #MUFC. It was a cheap deal: Bayern eventually paid €21.7m as FCB didn’t play him more than 60% of the minutes the previous season. If they had, he would have cost €90m (FCB forgot about that clause?)

United, Chelsea, Manchester City and Arsenal are mentioned by the journalist as clubs that ‘would want him’, but Liverpool remain the frontrunners. German outlet Kicker say Thiago, his ‘fine right foot’ and ‘supple body movements’ is a player Jurgen Klopp ‘should be interested in’.

While there has been no ‘official’ contact and the Reds still seem adamant that they will conduct no extravagant transfer business this summer, Bayern have priced Thiago up at somewhere between £72.3m and £54.2m. They hope to put that sort of money towards perfect Chelsea match Kai Havertz, which is awful sensible of them.

PHIL ME IN
Philippe Coutinho won’t be returning to Anfield; that much seems certain. But he, too, could be headed for England.

That pesky Kia Joorabchain ‘is looking to manufacture’ a switch to Arsenal – and ‘the move is not out of the question’.

The Daily Mirror add that ‘if a deal does occur it will require Barcelona to subsidise part of his contract’, but Mikel Arteta could apparently be keen. If he’d improve Liverpool, he’d certainly help the Gunners kick on.

WILL POWER
The same outlet offers some insight into one of Arsenal’s more ambitious pre-pandemic transfer plans. All of the money was going to be thrown in the direction of Willian.

The man who handed Liverpool the title is a target for the Gunners as his Chelsea deal nears expiration. And ‘a £250,000-a-week contract’ would have been tabled to a player who turns 32 in August.

Even John Cross admits ‘Arsenal may struggle to hit that figure now,’ with ‘one expert’ claiming ‘better’ free agents ‘could get 25 per cent less’ in terms of wages than they were likely to command before. But Arsenal handing out four new contracts in a panic suggests even £180,000 or so would be a little too much.