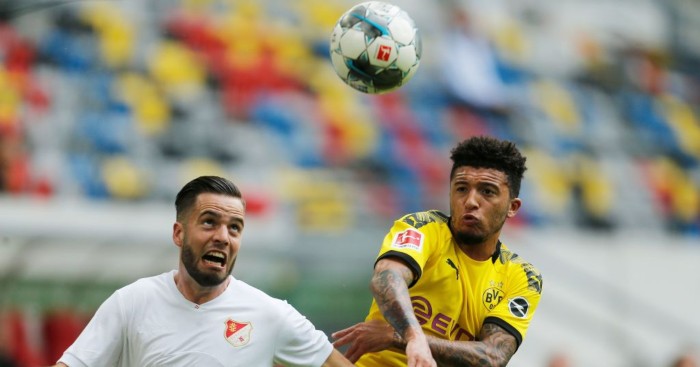 Jurgen Klopp ‘has officially asked’ for Liverpool to sign a striker, while Man Utd are closing in on a winger…

It looked like Napoli were on the verge of completing a €50m+ transfer after they reportedly began ‘concrete negotiations’ on Monday with Osimhen deciding ‘not to continue’ talks with other clubs. However, that was apparently before he knew about interest from Liverpool.

Now the striker and his representative have apparently made a complete U-turn now they have learned about interest from Jurgen Klopp and Liverpool. Venerato believes that Osimhen’s “change of agent has proven decisive” as he now apparently prepares for a move to Liverpool.

“New and perhaps decisive steps forward in Liverpool’s purchase of Osimhen,” Venerato told Calcio Napoli 24 (via Sport Witness). “His new agent seems to have left little margin for the Blue management after a telephone talk.

“There are signs of cosmic pessimism mixed with resignation coming from Castel Volturno. After Pépé, Osimhen seems to have vanished too. The change of agent has proven decisive. But we mustn’t forget the past. The boy had long had doubts about his destination. He dreamt of the Premier League.

“Naples was his alternative choice in the absence of concrete offers. Now that Klopp has officially asked for him, it’s all over. The appeal of the European champions, the Reds is too strong, money aside. There’s not only economic reasons for Oshimen. The Premier League is the dream of all Nigerian boys.”

MAN UTD CLOSE IN ON TOP TARGET
Rumours of Manchester United making a move for Borussia Dortmund winger Jadon Sancho have rumbled on all year but The Sun claims things have taken a step forward.

A report in Bild on Thursday said that Dortmund are waiting for Man Utd to submit an offer for the England winger, and when it comes, it should be worth in the region of £109million. But United were understood to be waiting until they know if they will be playing in the Champions League next season before making their move.

However, the Red Devils have now apparently decided to ‘step up’ their ‘transfer pursuit as [Ole Gunnar] Solskjaer eyes all-English attack’ at Old Trafford with Sancho joining Mason Greenwood and Marcus Rashford in their line-up. The Sun ‘exclusive’ says that Man Utd are ‘pushing ahead’ with the Premier League side ‘close to an agreement’ with Dortmund over the potential transfer.

Sancho ‘wants to move’ with Solskjaer still keen to ‘bolster his attacking options’ despite the brilliant form of Greenwood, Rashford and Anthony Martial. The report lacks detail…

CANTWELL IN DEMAND
Norwich City midfielder Todd Cantwell is attracting lots of interest from Premier League clubs with Leicester City and Newcastle United the latest teams interested, according to the Daily Mail.

The Canaries’ relegation back to the Championship was confirmed after they lost to West Ham last week and now their is a ‘list of clubs’ looking to buy one of their star players. In his first Premier League season he has scored six goals and provided two assists for this team-mates with Norwich only bagging 26 goals all campaign.

The report also credits Manchester City, Manchester United and Tottenham with an interest, while Bayern Munich have also ‘assessed’ Cantwell. Leicester and Newcastle have both ‘made their interest in Cantwell known’ with Norwich ‘hopeful they can retain their prized assets though are braced for offers which will test their resolve’.

AND THE REST…
Newcastle plan a swoop for John McGinn upon Aston Villa’s relegation…Wigan youngster Alfie Devine is on the brink of signing for Tottenham…Chelsea will receive a huge cash windfall after Eden Hazard helped Real Madrid win the La Liga title…Mikel Arteta is keen to seal a deal to keep Dani Ceballos at the Emirates and sign him from Real Madrid…Manchester United’s Marcus Rashford is planning to become a global superstar by trademarking his name in America…Brendan Rodgers has warned there are no guarantees Ben Chilwell will still be at Leicester City next season.