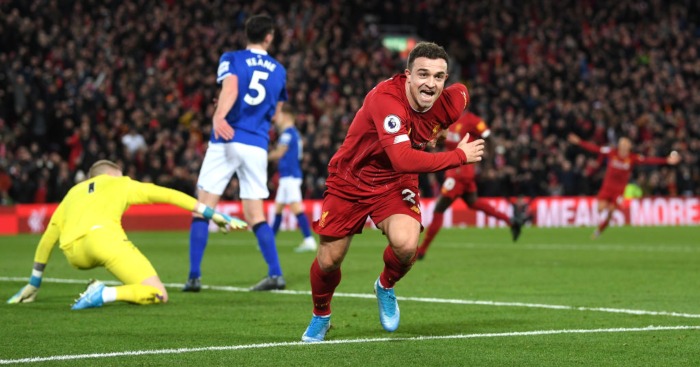 Liverpool are set to make a nice big profit on one of their fringe players, while Manchester United and Arsenal suffer a transfer market blow…

LIVERPOOL TO MAKE BIG PROFIT
Liverpool are reportedly set to double their money when they attempt to sell Xherdan Shaqiri this summer. The Switzerland international, who moved to Anfield from Stoke City for £13m in 2018, has failed to impress this season under Jurgen Klopp with the 28-year-old limited to just two Premier League starts.

And now Football Insider claims that Sevilla are ‘are planning to submit a formal bid’ for Shaqiri after Liverpool told him that he could leave. Not only are the Spanish side in for Shaqiri but he has ‘multiple European clubs’ interested.

Roma and CSKA Moscow are two other clubs that fancy Shaqiri with Liverpool prepared to let him leave for £28m, which would represent a brilliant profit on a player that has barely played. Liverpool director of football Michael Edwards rejected loan offers for him in January and the player ‘did not push to leave’.

CANCEL THE PARTEY
Arsenal and Manchester United are set to be disappointed in their pursuit of Thomas Partey with the Atletico Madrid midfielder set to sign a new deal, according to reports. Partey was heavily linked with a move to Arsenal and United last summer but the Ghanaian stayed at Atletico then and the same is likely to happen again.

The 26-year-old has contributed three goals and an assist from central midfield in his 34 appearances in all competitions this campaign for Atletico. And Spanish newspaper AS claims that the La Liga giants have offered Partey a new contract to ward off interest from other clubs around Europe. Atletico ‘expect the player to accept the renewal offer’ with the club conscious of his €50m release clause which they want to double.

AS adds: ‘Negotiations between Thomas and Atlético have been going on for a long time , although both sides have prioritized the competition rather than sitting down to talk.’ The report expects him to sign a new deal before the end of the season.

REAL MADRID GET THEIR PRIORITIES STRAIGHT
Real Madrid will pursue a deal for Borussia Dortmund striker Erling Haaland this summer with Liverpool set to breathe a sigh of relief over Sadio Mane, according to reports. Los Blancos had been heavily linked with a move for Mane over the last month or two but the Daily Express claims the Senegal international is not Zinedine Zidane’s ‘first choice option’.

Haaland was linked with a move to Man Utd before his £18.5m switch to Dortmund from Red Bull Salzburg in January and he’s hit the ground running. The 19-year-old has continued his amazing goalscoring rate for Dortmund, scoring 12 goals in 11 matches for the Bundesliga outfit.

Real Madrid are desperate to fill the void left by Cristiano Ronaldo following his move to Juventus in 2018. Last summer’s big signing Luka Jovic has scored just twice in 24 games, and will likely be moved on, and Karim Benxema’s time at the Bernabeu is coming to an end. And Zidane has made Haaland ‘his top target’.

Manchester United would have to pay £450m to Real Madrid if they are to sign their 21-year-old Uruguayan midfielder Federico Valverde…Everton have made a £30m bid for 22-year-old Brazilian Lille forward Gabriel Magalhae…Liverpool are the favourites to sign striker Timo Werner from RB Leipzig…Chelsea are looking to rival Manchester United for Birmingham’s 16-year-old English midfield prodigy Jude Bellingham…Chelsea have enquired about Real Madrid’s 21-year-old Morocco international Achraf Hakimi.