Man City are set to celebrate their Champions League reprieve in precisely the manner you would expect... 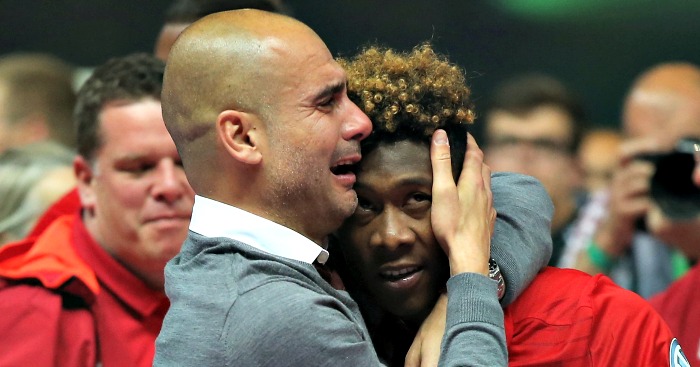 CITY TO TIE DOWN PEP AND GO ON SPENDING SPREE
To celebrate their Champions League reprieve, Manchester City will enjoy a peaceful, low key summer. Not really. They’re going on a spending spree because why the f*ck not?

The Mirror reckons their first blowout will result in Pep Guardiola signing a new deal. The City boss is in the final year of his contract at The Etihad and now the prospect of a couple of years in the European wilderness is of no concern, it is thought the club will seek to tie Guardiola down to another long-term deal.

A splurge in the transfer market may well go some way to convincing Guardiola to put pen to paper. The Guardian says City will give the manager £150million  – which they might claim was raised by the half-time raffle during their last home match – to spend on his squad, with centre-back and left-back being the areas prioritised most. David Alaba is Guardiola’s primary target, according to that report.

But The Telegraph claims Guardiola is more interested in Kalidou Koulibaly as the headline name among up to five signings, which may also include a replacement for Leroy Sane and a new striker with Sergio Aguero’s long-term future in doubt.

READ: Were we all getting carried away with the ‘new Man Utd’?

BARCA GIVE UP ON NEYMAR
We wouldn’t put it past City to go and sign Neymar this summer just to really stick it to UEFA. If they wanted to, it would appear that they would have little competition…

Because it seems Barcelona have given up hope of re-signing the Brazil star, at least if reports in Spain are to be believed. Barca received a world-record fee in 2017 from PSG and though some at the Nou Camp would love to make Neymar’s dream of a return come true, it would appear that PSG, quite reasonably, don’t fancy sending him back for buttons.

For that is what Barca have to spend this summer, it would seem. Not that it has put them off going for Lautaro Martinez, but they still have to shift some of their expensive deadwood before they could hope to meet Inter Milan’s demands for the Argentina striker.

REAL MAKE PLANS FOR MBAPPE
Real Madrid are similarly brassic this summer, if some reports are to be believed. But that isn’t stopping them from making big plans for next summer…

Those plans seem to centre around Kylian Mbappe. Real and Mbappe have been flirting for years but Marca says the Spanish club sees 2021 as the perfect time to make their move.

By that time, Mbappe may well be a year from free agency, which would be a nightmare for PSG. As would be the prospect of losing both Mbappe and Neymar in the same summer, so the Parisians will pull out all the stops to convince the France striker to recommit.

Real are hoping Mbappe’s long-help desire to play at the Bernabeu will help him resist the mega-f*ck-tonne of money PSG will place before him so they can do a deal at less than market value, similar to those which took Eden Hazard and Thibaut Courtois from Chelsea in the last couple of years.

CHELSEA EYE OBLAK IN SWAP DEAL
Chelsea reacted to losing Courtois by making Kepa Arrizabalaga the world’s costliest custodian. Now the Blues may have to right that expensive wrong by setting another new record for keeper…

Frank Lampard has been asking the club for a new No.1 since the start of the year and The Mirror claims Chelsea have got Jan Oblak in their sights. But the Atletico Madrid stopper would not come cheap. His buy-out clause amounts to £120million but the suggestion is that a package worth £100million might be enough to tempt Atletico to do business.

Chelsea would include Kepa as a makeweight in the deal but there are no details over his valuation. We presume Atletico would demand that the Spanish stopper brings with him a cheque worth at least £50million and hope he doesn’t drop it on the way…

FOXES LEAD HUNT FOR CARVALHO
From La Liga to Leicester we go, which is the same journey William Carvalho may soon be embarking upon…

The Portugal powerhouse has been linked with a move to the Premier League seemingly since the dawn of time but Carvalho instead joined Real Betis when he left Sporting Lisbon two years ago. Now, though, the 28-year-old may finally be bound for these shores.

Estadio Deportivo claims Leicester will pay £23million for the midfielder but since these reports have been kicking around for a few weeks, it seems the Foxes may be waiting to see if they pass up their Champions League chance before finalising their transfer business.