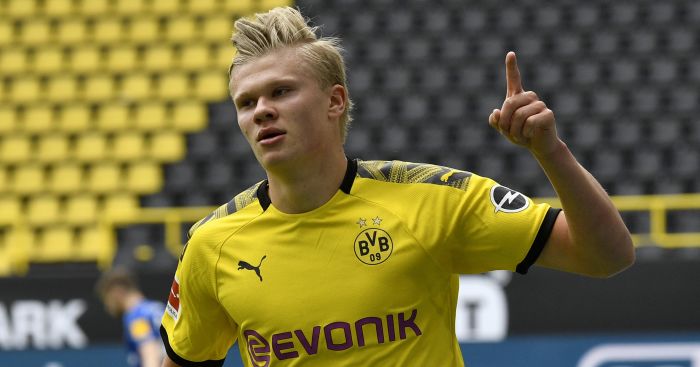 Kevin De Bruyne might not be all that arsed about the prospect of playing with Lionel Messi, but Manchester City are making plans for the arrival of the Argentina superstar anyway…

The Mirror reckons City are ready to let Sergio Aguero walk away from the Etihad next summer when his contract expires to create room in their squad for Messi.

Of course, wherever there is an ageing Premier League star looking for a club, Inter Milan are never far away. And Calciomercato makes Inter the favourites to land Aguero on a free transfer next summer.

CITY TO GO EARLY FOR HAALAND

Aguero may well leave City but Don Balon reckons Pep Guardiola will replace the club’s record goalscorer with another centre-forward.

Apparently Erling Haaland is the target. The Borussia Dortmund striker has a release clause which comes into effect in 2022 that would make him available for £62.5million, which looks like a steal right now.

But City reportedly won’t wait and will go in with a £90million offer next summer to avoid being caught up in the scramble for the Norwegian.

David Alaba is also available for free next summer and City have been chasing the Bayern Munich defender for at least a year. But they should brace themselves for disappointment.

Because it is being reported by Todoficajes that Alaba has a deal agreed to join Juventus next summer.

Manchester United and PSG have also been linked with the Austria defender, who remained a target for City right up until deadline day while Real Madrid, Barcelona and Chelsea were mentioned over the weekend as potential suitors. But having spent his entire career at Bayern, it would appear that the 27-year-old fancies a move to Italy.

DEMBELE SWAP DEAL IN THE WORKS

Juve are also being linked with another swap deal which could see Ousmane Dembele head to Turin.

Dembele was wanted by Manchester United last week when they were scratching around Europe looking for a right-winger. Barcelona wanted to sell the Frenchman, who didn’t seem to fancy United much anyway, but the Red Devils were only interested in a loan.

Calciomercato says Barca could shift Dembele in another swap deal with Juventus which would see Federico Bernardeschi go the other way. If the bookkeeping is anything like that employed in the part-exchange which saw Miralem Pjanic and Arthur swap places this summer, then Dembele might be valued at around £250million…

NO LIVERPOOL DEAL FOR BUTLAND

Liverpool were linked this weekend with a move for Jack Butland. The former England keeper cannot get a game for Stoke at the moment but it was claimed that Jurgen Klopp fancied him as a better bet to keep his goal than Adrian.

That may be the case, but the Liverpool Echo says the Reds are not in negotiations over Butland and Klopp will keep faith with Adrian to stand in for Alisson.