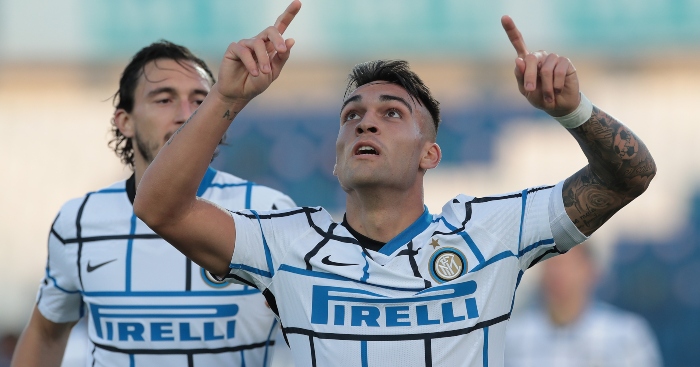 Yesterday, Manchester City’s priority was the signing of Jack Grealish and the Villa captain’s performance for England last night would certainly justify that approach. But today we learn that City are supposedly prioritising for 2021 the recruitment of a top-class striker.

In news which could dismay Lionel Messi, 90min.com says City are preparing to ‘transition away from Sergio Aguero’ by going after another leading hitman.

Top of their wishlist is said to be Erling Haaland, who is also a target for Real Madrid, and Lautaro Martinez.

The Inter Milan striker is reported to be the most likely arrival since City’s main rival for the 23-year-old is Barcelona, who’ve barely a pot to p*ss in when it comes to transfer funds.

Liverpool have got cash in the bank but it seems they weren’t willing to spend enough of it on Kalidou Koulibaly.

The Reds find themselves amid a defensive injury crisis with Joe Gomez and Virgil van Dijk ruled out long term while Joel Matip and Fabinho have their own fitness concerns.

The champions were linked with Koulibaly in the summer but one report suggests they walked away from the Napoli centre-back because of his price.

Speaking on The Transfer Window podcast, Ian McGarry claims the Merseysiders opted against a deal because the Italians wanted ‘around 60 million euros (£52.3million) and Liverpool are not willing to spend that on a 29-year-old’.

You may have already been aware of Arsenal’s interest in Brazilian forward Brenner but, according to The Sun, the Gunners have been boosted in their hopes of signing the 20-year-old Sao Paulo star.

A deal should be more straightforward since Brenner reportedly possesses an Italian passport, just like Gabriel Martinelli, which enabled a smooth transfer from Ituano last year.

Negotiating with Sao Paulo might not be quite as simple but the striker, who has scored 17 goals in his last 27 games, has a release clause in his contract worth £45million. That deal expires in 2022 and the impact of Covid means Arsenal could snare Brenner for considerably less.