Man City are prepared to sign Lionel Messi this summer if he is available, while there's an SOS at Man Utd... 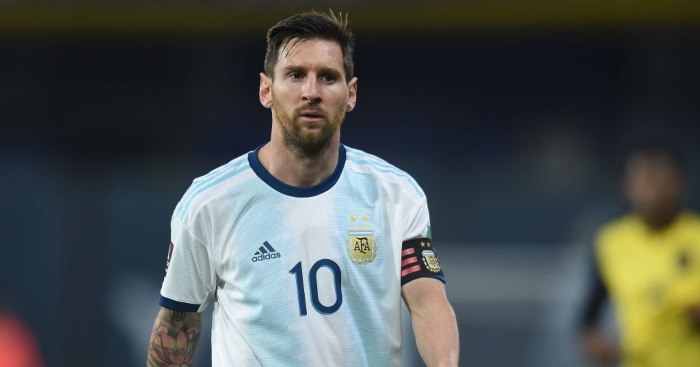 Man City are prepared to sign Lionel Messi this summer if he becomes available, while there’s an SOS at Man Utd…

CITY READY TO MOVE ON MESSI

Manchester City have positioned themselves so they can make a swoop for Lionel Messi in the summer if he is willing to leave Barcelona, according to reports.

The Argentinian forward had informed the Spanish club on August 25 that he wanted to leave this summer – with City emerging as the main suitors – and intended to utilise a clause in his contract which he and his representatives claimed allowed him to walk away on a free transfer. However, Messi ended up reversing his decision to leave, saying he could never go to court against the club to secure a move.

The tone of Messi’s statement back in early September – in which he criticised Barca president Josep Bartomeu – clearly indicates he would still like to leave the club, but would now do so when his contract ends next summer. That has given hope to Man City that they can secure a deal for Messi this summer.

The Manchester Evening News have an exclusive with the headline reading ‘Man City send Lionel Messi transfer message for next summer’. That message is that City ‘will be in a position to move for Lionel Messi next summer if the opportunity arises’.

The report adds that ‘”smart spending” from the Blues over a number of years sees them in a position where they would be able to afford the superstar were he to be in a position to join’. Messi ‘does not fit the usual profile’ of player that City usually invest in but they ‘are flexible to make exceptions for the right talent’.

“He’s probably an exception to potential investments that we’d do… but our planning has been done with this current squad and it is being considered with the current opportunities that we have.

“For every single position we have to be prepared because there can be so many things that can happen but, at the same time, I think we have the financial strength and system ability to make that investment when required.”

Paul Pogba looks likely to remain at Manchester United for the rest of the season with Real Madrid holding no interest in taking him to the Bernabeu, according to reports.

Pogba reiterated his “dream” to play for Real Madrid after France’s 7-1 win over Ukraine on Tuesday despite promising his “maximum” to Man Utd. The midfielder opened up on his desire “to have a new challenge somewhere else” last June before staying at Old Trafford and eventually finding his way back into the first team after injury.

The France international has seemed more settled than ever of late, with some reports even suggesting contract talks were imminent, but he has quite happily entertained the prospect of a move to Real Madrid again. But the LaLiga giants reportedly have no interest in taking the 27-year-old to Spain.

Spanish publication AS claims that ‘Pogba’s SOS will have no response from Real Madrid’ after the club ‘definitely ruled out his signing’. The report calls it a ‘strange SOS’ with Eduardo Camavinga and Kylian Mbappe bigger priorities for Real. AS adds that Pogba’s ‘message of help will not have an answer from Madrid, which today has totally ruled out his signing’.

Belgium midfielder Kevin de Bruyne is closing in on a two-year £300,000-a-week contract extension at Manchester City…Arsenal’s £27m defender William Saliba, yet to play for the club, looks set to join a Championship side on loan, with Brentford interested in the 19-year-old…Juan Mata has been offered a lucrative deal to leave Manchester United for Saudi Arabia…Chelsea forward Olivier Giroud says he was close to a move to Serie A, both in January and in the summer…Aston Villa are planning to clear space on their wage bill by selling squad players as they plot a fresh swoop for Bournemouth striker Josh King.