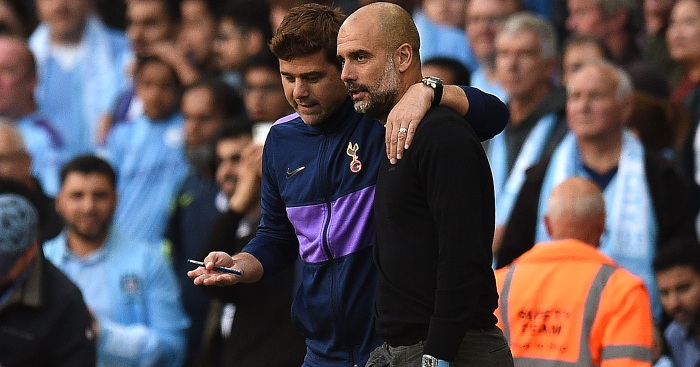 City will snap up Poch, Manchester and Chelsea look to the alternatives…

CITY LINE POCH UP
Guardiola admitted last month that Khaldoon al Mubarak was “not happy” with their effort in the league. The Manchester City chairman is unlikely to be more jovial now, given the FA Cup and Champions League disappointments.

Pep has not yet committed to City beyond next summer, and although The Sun claim the hierarchy are keen for him to extend his deal, they fear being left in limbo if he doesn’t commit soon.

Mauricio Pochettino is still out of a job, which is both surprising and unsurprising given his obvious talent as a manager along with his cool head and unwillingness to rush such an important decision. Barcelona are thought to be interested, but that’s a non-starter given his affiliation with rivals Espanyol, and he has said he is keen to stay in England. And the report claims City are ‘lining him up’ should Pep decide to up sticks.

Pochettino is yet to win a trophy as a manager, but did guide Spurs to the Champions League final last season, a feat Guardiola is yet to achieve with all the talent at his disposal.

DYBALA DOOR OPEN FOR UNITED
Solskjaer had made clear his desire for more “quality” at United. And while the defence may actually need more attention, he will still be keen to bolster his forward options. A move for Jadon Sancho is ‘off’, so it’s time to revisit the Sancho alternatives. There are plenty.

One of those standbys is Paulo Dybala, unbelievably talented but yet to achieve his potential: they’ve been saying so for years now. But a fresh start could be what he needs as Juventus look to raise some money for their own summer recruitment drive.

Gazzetta dello Sport (via Caughtoffside) claim both United and Tottenham are interested in a move for the Argentina international, who Juventus are willing to let leave the club if the price is right. A swap deal involving Paul Pogba has been mooted, with Andrea Pirlo – newly instated as the Juventus boss – a big admirer of the France international having played alongside him for the Old Lady.

CUT-PRICE CHILWELL
Juventus’ desire to raise funds means Chelsea could land Alex Sandro in a cut-price deal. Frank Lampard is desperate to sign a left-back with Ben Chilwell thought to be his primary target, and Sandro has been linked with a move to the Blues for over two years.

The Serie A side were rumoured to have rejected a ‘very good offer’ from Chelsea for the Brazilian in the summer of 2018, but a nominal sum in comparison would now be enough to lure him to Stamford Bridge, according to Corriere dello Sport (via the Express).

They claim £36million would be enough, less than half of what Leicester want for Chilwell. With Chelsea also targeting Lewis Dunk and John Stones as Lampard seeks to sort his defence ahead of next season, one of the many cheaper alternatives to Chilwell may be the sensible option.