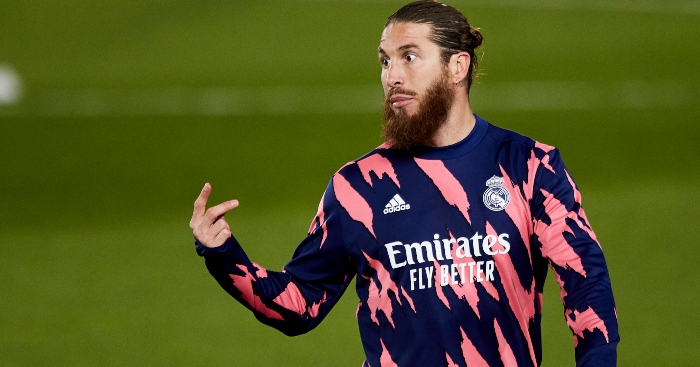 Get your transfer gossip here…

CITY EYE RAMOS SWOOP
It’s been a week or so since Sergio Ramos has been linked with a Premier League club and with the Real Madrid captain now free to speak to clubs about a pre-contract agreement, we’ve been waiting for his name to crop up again.

Lo and behold, ESPN have come up with the good stuff. The talk is that Manchester City are now monitoring Ramos’s situation, with an extension with Real still unsigned. Pep Guardiola, apparently, sees Ramos as an ‘interesting’ option to provide some leadership at the back for City, who would have no problem agreeing to the salary demands Real are baulking at.

Real are willing to meet Ramos’s request for a two-year deal and the 34-year-old’s preference is to remain in Madrid, which City seem to know. But in the unlikely event that Ramos and Real can’t come to an agreement, then Pep is waiting.

It had been thought that the La Liga leaders were in pole position to sign David Alaba on a free from Bayern Munich this summer. That remains the expectation, but Goal reports that talks between the Austria star and Real are not going as smoothly as the club might have hoped.

Given those figures it’s no wonder Barcelona dropped out of the Alaba race.

BARCA TO WAIT FOR TRIO
Speaking of Barca, Sky Sports have reiterated that their primary targets this month are Eric Garcia, Memphis Depay and Georginio Wijnaldum.

But even though all are in the final six months of their contracts at City, Lyon and Liverpool respectively, Barca might struggle to afford any of them, even at a knockdown price.

So it seems likely they will wait until the summer in the hope of picking them up as free agents.

ARSENAL OFFER PART-EX DEAL FOR BUENDIA
Arsenal are also having to be creative when it comes to funding January deals. The Gunners are being linked again with Emi Buendia and Mikel Arteta may be willing to do a part-exchange deal.

The Independent says Arsenal will offer Norwich cash and one of Joe Willock or Reiss Nelson.

But Sky Sports reckons Norwich will resist any offers for Buendia, Max Aarons – supposedly a Man Utd target – and Todd Cantwell as they seek an immediate return to the Premier League.