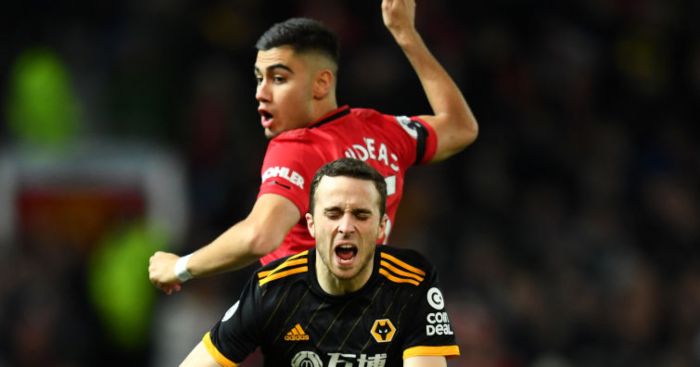 When Man United stop trying to sell Paul Pogba, they will alleviate their ‘panic’ with a move for a Wolves forward…

That is the entirety of an article on Calciomercato.com, detailing (for want of a better word) one Europa League club’s interest in a direct rival’s player. Man United are not content with targeting only Raul Jimenez and Ruben Neves from a team one place below them while Diogo ‘Class 1996’ Jota is busy scoring hat-tricks.

The English version of Calciomercato mercifully offers more information. They inform us that United have watched Jota ‘for some time’ and have been impressed with his ‘quality’ and ‘consistency’.

He had not scored or assisted in eight games until Thursday.

There is no suggestion of a possible fee but United are said to have identified Jota as the ideal man to ease their attacking ‘panic’. At 23 and with more than two years left on his contract at a club that paid £12m to sign him – with former employers Atletico due a percentage of any future fee – there is surely a most cost-effective medication on the market?

CAPTAIN’S POG
Perhaps Man United are too busy posturing over the future of Paul Pogba to look elsewhere. Goal.com suggest player and club could reach some sort of ‘compromise’ over a new deal despite a recent Mino Raiola-fuelled ‘breakdown in communications’.

The belief is that while United ‘had privately accepted the likelihood’ of Pogba leaving this summer, Raiola’s recent outburst could hasten any exit. Mission accomplished.

The problem is that Ed Woodward is refusing to countenance a loss on the £89.3m paid to Juventus in summer 2016. So either The Old Lady or Real Madrid will have to increase their offers by the summer.

United, who feel that Pogba’s marketability should see him valued higher, could therefore open negotiations over a contract extension that would protect their asset. Why Pogba – or Raiola – would agree to that is unknown.

VINGA BOY
The bad news for Man United is that Real are essentially bored of the chase. Marca claim that they have moved on and ‘intensified’ their interest in Eduardo Camavinga.

You might have heard of him. He’s the 17-year-old midfielder currently impressing at Rennes. And Real have been keeping track of him for two years, only now becoming ‘convinced’ of his talents.

While no contact has been made with Rennes or even the player, Real are now trying to persuade Zinedine Zidane to abandon his perennial Pogba plans. Marca suggest ‘a probable change in the bench’ could see the Frenchman stay at Old Trafford, but the £58.6m valuation of Camavinga appeals to Real either way.